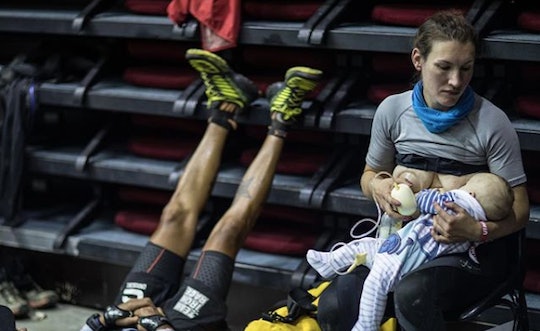 16 Hours Into A 107-Mile Race, This Mom Stopped To Breastfeed Her 3-Month-Old Baby

In the latest example of why women are total badasses, meet this mom who stopped to breastfeed her baby the middle of a 107-mile race earlier this month. Yes, moms are totally unstoppable and British ultra runner Sophie Power is just further evidence of that.

Being three months postpartum, and exclusively breastfeeding her newborn, drastically changed the way Power ran this race. Because she couldn't stop long enough to properly feed her baby, she had to self express her breasts during the first half of the race to relieve engorgement, according to People. After that, she was able to use her breast pump at each aid station, as the New York Post reported, until she was finally able to stop and feed her son.

Even though this race was a bit more challenging, Power said she enjoyed the chance to focus on herself. As she told People of the experience:

In a typical race I would get in and out of the aid stations as quickly as possible but here I had to focus on keeping down enough food (for me and for Cormac!) and resting. The goal was simply to get round the course which gave me so much time to take in the views, chat to people and really absorb the whole experience. It was also a much needed mental break to only have to think about looking after myself for once.

Power is definitely used to being active. But, could the average mom do this sort of physical activity after giving birth? In an interview with Fit Pregnancy Magazine, Chicago based trainer Sari Weis said, “The biggest thing about working out after birth is you had to have exercised before and during your pregnancy. If you exercised before and during pregnancy, you’re going to be on a much different playing field.” So, if you aren't used to a high level of physical activity, start slow and always consult your doctor before starting a new exercise regimen.

Power, herself, could barely believe the feedback and the fact that she finished the race in the time she did. According to Runner's World, she completed the race in 43 hours and 33 minutes.

Not surprisingly, this isn't the first time a mom has breastfed during a marathon. In 2016, Emily Sabato nursed her 9-month-old daughter while running in the New York Marathon, as HuffPost reported at the time, prompting both criticism and congrats from onlookers and news outlets. But it was the mom crowd that showered her with praise, much like they did for Power following her race.

Moms from around the world are singing Power's praises, and thanking her for normalizing breastfeeding while also showing that you can stay fit and active throughout pregnancy.

"We have always said this - Yes, you can be fit and active while being pregnant and while breastfeeding!" one Twitter user wrote.

"Breastfeeding can be done anywhere and everywhere!" another admirer chimed in.

"I mean, this is just incredible! What a woman, a warrior! Running an ultra anytime, let alone 3 months after birth and breastfeeding as you go," yet another tweeted.

Power competed in one of the hardest races in the United Kingdom and still came out on top, all while thinking of her baby's best interest. It's definitely true that moms are the ultimate multitaskers and take care of business better than anyone else — and Power's latest feat is just further proof of that.