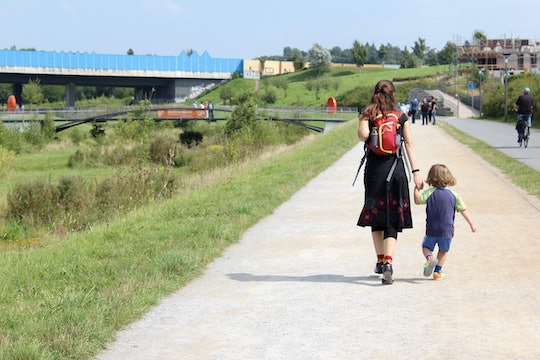 This Mom Took Her Son To A Clothing Store For Girls, & The Story Is So Important

A North Carolina mother wrote an open letter on Facebook about her 10-year-old son's experience shopping for girls clothes and it's gone viral. When she took her son to a clothing store for girls, it made his day, and it's a statement that parents everywhere should check out. In her letter, Martie Todd Sirois wrote that her son Charlie had wanted to shop at the girls' clothing store Justice since he was 4, when his older sister would shop there. When the day finally came, the store did not disappoint. Sirois wrote that her son "couldn't get" the skirts and leggings "on fast enough."

She wrote that the experience "was pure joy. My son dropped his frequent doom and gloom look and suddenly sprang to life in these clothes. There was no denying he became a different, more confident, and happier child when wearing pretty things."

On the day Sirois had originally planned to visit the store with Charlie, North Carolina legislators passed a law banning transgender people from using public restrooms and changing rooms consistent with their gender identities. She canceled the trip because she was afraid they store would have a legal right to deny her son entry to a female dressing room.

"I have to call ahead to certain stores to make sure they're open to providing traditional 'girl' services to a gender non-conforming boy," Sirois told Newsday. "Because they'd be protected under law to discriminate against us, if they so chose to fight that battle."

Sirois started a network in Raleigh for parents of kids who are gender non-conforming called S.E.A.R.CH. (Safe Environment for the Acceptance of Rainbow CHildren). One of the group's members asked whether a boy would be able to shop and try on clothes at the store whose tagline is "Just for Girls!"

The store manager assured Sirois' friend that "everyone is welcome at Justice," and any rudeness or discrimination from fellow customers would not be tolerated.

Sure enough, Sirois didn't receive any pushback. Instead, the store manager greeted them warmly and "basically took on the role of my son's personal shopper for the evening," Sirois wrote in her letter.

The employee even stayed past her shift's end to help Charlie shop. Sirois wrote the experience gave her "hope for the future," and added:

She made my son feel beautiful and totally free of judgment. I want to thank her for that precious, precious gift. I rarely get to see my son being his full potential, his absolute true self in public. She encouraged that and even helped bring it out.

"We definitely had an advocate at this store," Sirois wrote in the letter.

Sirois said that Charlie hasn't always been accepted for his love of girl's clothes and accessories. When Sirois took Charlie back to school shopping, her son picked a backpack that was a “glittery explosion of rainbows and hearts.” Although she feared he'd be teased, she and her husband bought him the bag and let him wear it to school. “We have to embrace him everywhere, not just behind closed doors in our home,” Sirois told The Washington Post.

He was teased, and often sits alone at lunch. Sirois even overheard some kids calling her son “the boy that wears girl shoes.”

“I am blown away by the bravery he shows," Sirois told The Washington Post. "He could take his old blue backpack, but he straps on the girls’ backpack like a piece of armor.”

More Like This
Ginger Zee Had A Perfect Response After A Troll Asked Her "Who's Raising Your Kids?"
It's A Beautiful Day In Jenny Slate’s Neighborhood
35 Relatable Quotes That Prove Being A Mom Isn’t Easy
10 Of The Raddest Movies From The '90s To Watch On Girls Night