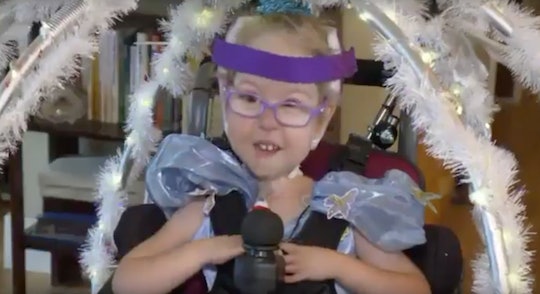 Coming up with a great Halloween costume for your kids is not an easy DIY task, but it can be especially tough when the child is in a wheelchair. There are so many extra things to consider, but a wheelchair is also a great blank canvas, as this mom who turned her daughter's wheelchair into the Cinderella carriage can attest. And yes, it's absolutely enchanting.

Tiffany Breen told her local Grand Rapics, Michigan Fox 17 news station that her 3-year-old daughter Roslyn often attracts stares from people in public because of her wheelchair. Little Roslyn has an undiagnosed muscular condition that impairs her ability to sit up on her own, according to the outlet. "I wanted her to draw attention in a positive way. A lot of times we get stares for different reasons," the creative mom told Fox 17 News.

Using tinsel, ribbon, and some hula hoops, she recreated Cinderella's horse drawn carriage for Halloween. She even put battery-powered lights on it to complete the effect. With Roslyn in a blue Disney princess dress, the final result is breathtaking. Who needs a fairy godmother when you have a crafty IRL mom?

Breen told the outlet that they had already visited the Zoo Goes Boo event at John Ball Zoo in Grand Rapids and Roslyn's carriage was a total "showstopper."

Breen told Babble, "I knew she would draw attention when we went out on community events, but I was not prepared for how popular it would be. People were stopping us and requesting pictures. Roslyn brings us that joy every single day. How lucky are we?”

Putting together a costume for a wheelchair is no easy task, especially for busy working parents or those who perhaps aren't artistically inclined. Which is exactly the problem that Magic Wheelchair hopes to solve. The non-profit outfits Halloween costumes for wheelchairs for kids every year. Although he did not design Roslyn's carriage, Ryan Weimer of Kaizer, Oregon founded Magic Wheelchairs in 2015 after the wheelchair costumes he made for his own kids — sons Keaton, 12, and Bryce, 6 — who both have spinal muscular atrophy, gained attention.

Weimar told ABC News that it was Keaton's joy that inspired him to turn his wheelchair costumes into something bigger. It was the "ultimate inclusion" in the holiday, Weimar said of the first costume he made in 2008.

"What was really, really amazing about it, that barrier of the disability seemed to be swallowed up in that costume," the dad added. In a way, it's about more than just a flashy costume for trick-or-treating. The costumes give the kids confidence, but they also raise awareness. Weimar explained to ABC News:

It was almost like a cure for the day. That awkwardness wrapped around the disability was gone for people. We’re really building awareness for people that these are just regular, cool kids. It was very touching for me and my wife, and it immediately made me think about other families and kids like ours that would love this experience too.

This year, he's made 40 costumes for kids across the country. People submit an application online to receive a costume and Magic Wheelchair's dedicated team of volunteer builders helps families put them together.

Weimar said that he wants these costumes to be more than just for Halloween. "Kids can roll in these all year round. It doesn’t just have to be Halloween. We want them to go shopping with mom in a dragon," Weimar explained to ABC News in 2015.

"I’m a nurse. I’m not an artistic dude at all. You just have a passion for doing it, and have some love, and make it happen," Weimar said of his builds, according to ABC News.

And just like Breen's horse drawn carriage for little Roslyn proves — as well as all of Weimar's creations — all you need is a little passion and love to make a kid's Halloween dreams come true.