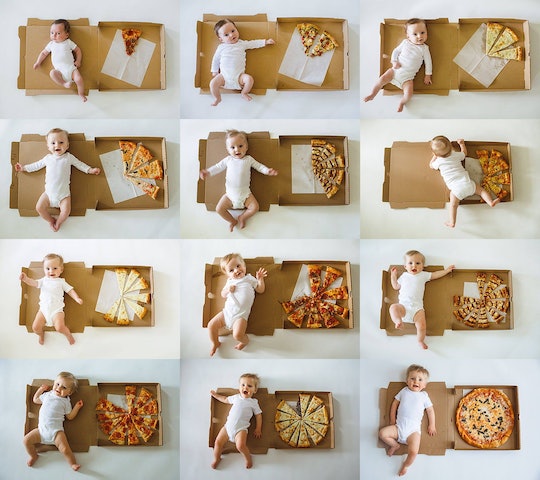 This Mom Used Pizza Slices In Her Baby's Monthly Milestone Photos, & It's Epic

There are so many creative ways out there to document a baby's first year of life. One of the most popular options is to take a monthly photo of your little one lying next to a sign or blocks that reveal how old he is. It's a simple and adorable way to see just how much an infant changes during those first 12 months. But sometimes, parents prefer to think outside of the box for this type of photo progression — and they wind up with something truly genius in the process. Because apparently, this mom used pizza slices in her baby's monthly milestone photos. And it's everything.

On Feb. 16, Dani Giannandrea — a photographer based in Baltimore, Maryland — shared a photo project that she's been working on for the past year. It involves her second son, Lorenzo, and a lot of delicious-looking pizza. And if you ask me, it's absolute perfection. The series of photos followed baby Enzo's month-by-month growth progression until he turned 1 on Feb. 10. Each month, Giannandrea would snap a photo of her baby boy lying on the opened lid of a pizza box — next to one slice at 1 month old, two slices at 2 months old, and so on.

It's a unique take on a classic practice by parents. As you can imagine, the adorable result is going viral. Take a look at the glorious cheesiness for yourself!

Pretty much everyone seems to be in agreement, based on the Facebook feedback so far: "Why didn't I think of this first?" One Facebook user wrote, "D*mn*t my kids are 3y4mo and 9mo — I've missed so much potential pizza!"

Another person was impressed that little Lorenzo didn't try to chow down on the delicious food sitting next to him, writing, "I’m not sure I could show such restraint with pizza..."

Yet another Facebook user wrote, "I will be doing this when I have a child. *insert tacos 🌮 *"

"The pizza theme was inspired by my mom, Lorenzo's Grammy, saying that I had to do something Italian as an ode to his name," Giannandrea tells Romper, adding her husband's family is Italian and Lorenzo was the first name they agreed on. "I had originally just thought about using pizza shaped plates and just doing that in a pizza box every month but then I figured if we were going to do this, we may as well do it right and get dinner out of it once a month. We love our local pizza place, il Forno, in Frederick, so it seemed like a no brainer! Anything to make mommin' easier."

Giannandrea says she initially took to Pinterest to search for further pizza inspiration for her son's monthly photos. But she came up with nothing — and had a hunch her idea could take off. And that it has.

"It seems as if everyone loves this idea — I love something happy being populated around the web," Giannandrea tells Romper. She added:

To everyone who is saying they wish they had come up with this — there are a millions of ideas to be had! Be the first to do something epic and fun too!

Cleary, this mom is onto something here. And I have a feeling her business, Dani Leigh Photography, is going to be booming as a result of this pizza-inspired photoshoot. Because pizza = life.

More Like This
Over 10,000 Sippy Cups & Bottles For Toddlers Recalled Due To Lead Poisoning Hazard
Celebrate Baby's First Christmas With These 40 Instagram Captions
The 16 Best Subscription Boxes For Every Kind Of Kid
41 Boy Names That Start With “G”