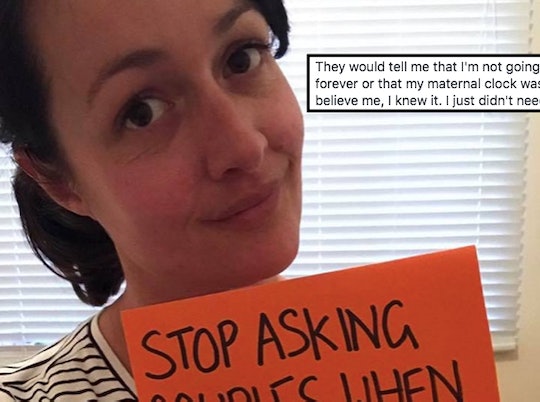 Within hours of saying "I do," friends and family were already peppering me and my husband with well-intentioned questions about what our future held. Specifically, they wanted to know when I would stop messing around and start popping out babies. Despite their well-wishing, the question is actually quite inappropriate and it needs to be squashed immediately. And one mom agrees, as she urged people in a now-viral post to stop asking couples when they'll have kids because it really isn't anyone else's business.

Mom and blogger Adele Barbaro shared her own experience with being asked that question in order to raise awareness about the impact it can have. She begins her post by sharing a few of the answers she would give when asked about her plans for kids. She would answer that they were "enjoying being newly married" or "traveling" or "focusing on [her] career." But as she explained in her post, these answers weren't the whole story:

These are just a few of the reasons I used (with a forced smile) to mask what was really going on. I wasn't always that pleasant. One day I responded with "it's not that f*cking easy, you know". I had just got my period that morning.... again.

She went on to explain that she and her husband had been trying to get pregnant. But it had been a difficult road for them because, as she wrote, neither of them are a "highly fertile 17 year old, that could fall pregnant just by talking about it," adding:

The odds of conception and retaining a pregnancy are actually pretty sh*t, topped off with the huge amount of people that are reproductively challenged with polycystic ovaries, endometriosis etc etc. And I was one of them....

Barbaro then revealed that she had struggled with IVF and how it felt to see those around her get pregnant. The "time consuming, invasive, expensive and emotionally painful roller coaster" was the real answer.

While Barbaro was able to eventually have a child, she is using her story to speak up for those who are still struggling. As it turns out, that's a lot of people. In fact, one in every 10 couples — amounting to more than 5 million people in the United States alone — has trouble conceiving, according to Parents.

Barbaro goes on to explain that these people may "be trying for years," and some without ever succeeding. But it's not only families who have trouble conceiving that can be hurt by that question:

...what about the couple that doesn't want kids? Or the couple that had a child but can't afford to have another? Or those that have lost little ones? Even though we went through IVF and had such a struggle to have our Harvey, soon after we were asked... "so when are you having number two"? And now that I have two wonderful children and I feel our family is pretty complete, the question still comes...

Many couples simply don't want children, and there is nothing wrong with that. Even those who would like another child are not always in a position to do so, especially considering that "families can expect to spend between $12,350 and nearly $14,000 a year, on average, to raise a child," according to CNN.

Commenters on the now-viral post — which has gotten more than 54,000 reactions and has been shared over 20,000 times — praised Barbaro for her honesty and thanked her for giving a voice to those who are silently struggling as they go through IVF. Celebrities like Tyra Banks and Chrissy Teigen have opened up about hard fertility struggles can be, but hearing it from a voice of the people, like Barbaro, goes far.

Barbaro's post closes with a plea to readers to "be sensitive," and think twice before asking such a loaded and very personal question. As this mom put it, "You never know what's going on."