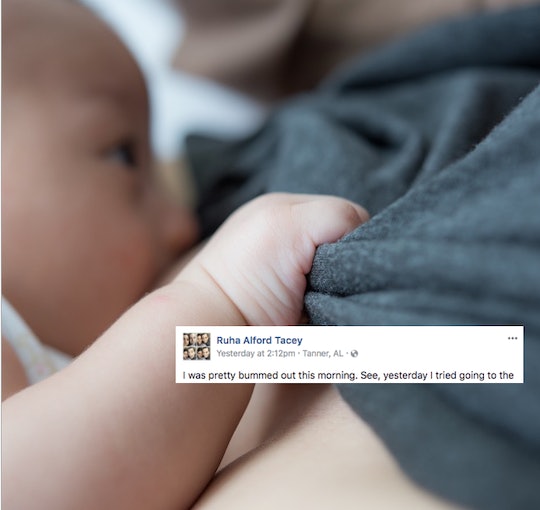 In 2017, the world has come a long way. There is face-scanning technology, drones, self-driving cars, and so much more out there to remind everyone that society, for the most part, has progressed. However, there are still so many instances of the way the world, and America in particular, seems to be stuck in the 1900s. Especially when it comes to women's rights, the United States seems a bit behind. Yeah, it may be 2017, but this mom was allegedly told to breastfeed in her gym's bathroom because people could possibly see her feeding her child elsewhere.

As Ruha Tacey, of Athens, Alabama, explained in a Facebook post, she was at her gym, SportsFit, on Monday, clocking in her first gym session since giving birth to her daughter. While she was there, Tacey needed to feed her baby, after she was having some difficulties in the provided child care room. So, she decided to breastfeed her daughter there, as is her custom and right. However, her daughter didn't feel any better after eating, so Tacey went home.

The next day, as Tacey explained, a man at the front desk stopped her before she went in and asked that she not breastfeed in the child care room again. According to Tacey's Facebook post about the situation, another gym-goer had seen her breastfeeding her daughter, and felt uncomfortable.

Romper has reached out to the SportsFit in Athens for comment on the reported incident and is awaiting a response.

According to her Facebook post, this is what the front desk employee allegedly said to Tacey, and her response:

"Hey, can I talk to you about something really quick? In terms of feeding your child, when you need to do that, could you just use the restroom?" The restroom? I asked. I have absolutely never been asked to do that, I said. "Well, we're a family friendly facility, you see, and yesterday while you were feeding her a man walked by the window."

While SportsFit has yet to respond to Romper's request for comment, Yahoo! reported that Tacey has been "assured that the company intends to retrain all employees with regards to breastfeeding laws, and the front desk operator will definitely not be asking future breastfeeding moms to nurse in the restroom."

It appears that the employee was trying to play the middle man for another customer who claimed to be uncomfortable by a mother breastfeeding her child. But, in turn, this conversation and the employee's request also made Tacey uncomfortable — so uncomfortable, in fact, that she decided to cancel her membership. But, that isn't the end of the story.

Not only was this request simply unnecessary and only enhances the stigma about public breastfeeding, but it was also against the law. According to Alabama legislation, "A mother may breastfeed her child in any location, public or private, where the mother is otherwise authorized to be present."

Tacey knew her legal rights, and because she did, she posted about the issue in a breastfeeding support group. From there, Tacey and some friends decided to organize a "nurse-in" on Wednesday. Per Tacey's Facebook post, "Nobody knows how to have fun better than a bunch of mommas. This isn't meant to antagonize or attack the gym. We just want to normalize breastfeeding and spread the love and support, not shame!"

So even though Tacey's rights were compromised, she didn't react in anger or spite. Instead she decided to turn the situation into something positive and progressive — and that's pretty great.

Speaking to Yahoo!, Tacey remained upbeat, maintaining that she just wanted all mothers out there to feel comfortable with breastfeeding:

The main message I’d like to get across to the public is that breastfeeding is natural, it’s normal, and it is absolutely nothing to be ashamed of. Individuals are welcome to have their own opinions about whether a nursing mother offends them, but I would hope that they could think of the child first.

And truly, there is no shame in providing for a child the way mother nature intended. Breastfeeding is the most natural thing in the world, and people who feel embarrassed or offended by seeing it clearly don't know how important it is.