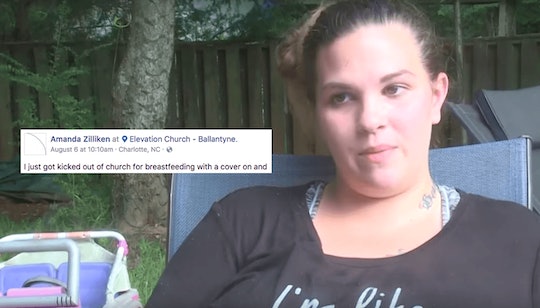 This Mom Was Forced To Stop Breastfeeding In Church, & Her Response Is Awesome

When Amanda Zilliken went to church on Aug. 6, she brought along her 4-month-old daughter. What should have been normal Sunday service at Church for Zillken and her baby turned into anything but, when Zillken was asked to stop breastfeeding in church, according to People. In a Facebook post, Zilliken said she was told couldn't breastfeed during the Sunday morning service at Elevation Church in Ballantyne, North Carolina. Even more rage inducing? Zilliken said on Facebook the volunteer who called out the nursing mother directed her to a bathroom, where Zilliken ended up missing the rest of the morning sermon as she finished feeding her child. Elevation Church did not immediately respond to Romper's request for comment.

Zilliken spoke to WCNC, saying that she was told to stop breastfeeding — while she was using a cover — and that the volunteer shone a flashlight at her during the service, movie theater usher-style. Elevation Church is a megachurch that attracts more than 20,000 worshippers to its nine locations throughout the Charlotte area, so Sunday services are a fully produced experience. Elevation Church provided the following statement to The Charlotte Observer:

We do not have a policy that nursing mothers can’t be in the sanctuary. A volunteer had a conversation and felt both parties arrived at the same conclusion to exit mutually. We are sorry that this in any way offended anyone. We welcome everyone and anyone to attend Elevation church.

Zilliken told The Observer what the volunteer said to her when asked to stop breastfeeding: "Honey, you have to understand that my job as a volunteer is to make sure everyone is comfortable, not just you." Between the volunteer's actions and words, Zilliken was embarrassed and humiliated by the experience, saying, "It embarrassed me, and drew people’s attention. To take me to the mother’s restroom was totally unacceptable, humiliating – and illegal." And Zilliken's right: Unfortunately for that volunteer, asking a nursing mother to breastfeed elsewhere — covered or otherwise — is not about the comfort of others. Allowing women to breastfeed anywhere in public is the law in North Carolina.

The response and support for Zilliken's right to feed her child at her place of worship has been overwhelming online. Ariel Tauro, a breastfeeding activist who lives in New Jersey, saw Zilliken's post on Facebook and decided to fight back against what happened to the 29-year-old mom of three. On Facebook, Tauro has organized a "nurse-in" at Elevation Church for next Sunday's morning service. So far, 30 people have responded saying they will participate at the nurse-in to stand in solidarity not just for Zilliken, but for any nursing mom who needs to feed her child while in church.

"That was wrong to take me from hearing the word of God to remove me to a restroom," Zilliken told WCNC. "That is what God made my body to do. We should not have to be ashamed of doing something that's good for our children." Preach.