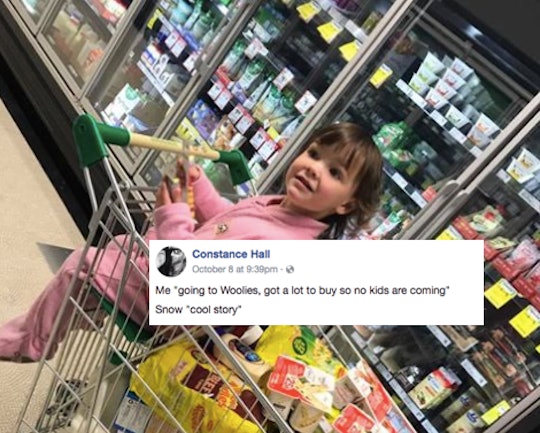 The circumstances surrounding mom-shaming are getting more and more ridiculous with each passing day. Is there nothing a mom can do without some holier-than-thou internet troll pointing out something "wrong?" In a recent and ridiculous case of judgement, mom and writer Constance Hall was shamed for her grocery shopping style, and her response expresses the frustration that is surely felt by moms everywhere when the topic of mom-shaming comes up.

What began as a simple Facebook post showing her adorable daughter riding in the grocery cart during some shopping quickly turned into a smorgasbord of criticism and judgement. Hall, an Australian mother of four, blogger, and popular social media figure explained in her caption that her daughter was having none of her solo-shopping fantasy and therefore tagged along. Rather than chime in on the lost reality of unaccompanied grocery shopping as a mom, many commented on Hall's choice of groceries instead. But calling her out for the "junk food" that she was buying wasn't enough. Many moms were somehow outraged by the way in which she organized her food — um, what?

Thankfully, Hall wasn't going to take all of that flack lying down. She fired back with a comment of her own on the incredulity of the commenters and pointed out that this kind of shaming is the exact opposite of what she is trying to promote with her page.

At first, Hall simply deleted the rude comments that were directed at her choice of food items — items like, God forbid, butter and eggs — but she later decided to respond to all of the negativity, saying:

For f*ck sakes. Getting mum judged on your anti mum judging page. Then everyone attacks the judgey mum even though you're an advocate for women sticking together. And if I was to drink the stiff bottle of scotch that this thread made me want to drink I'd be judged for that.

She went on to explain that there were actually a number of fresh fruits and vegetables hidden by the bulky packaging of the other items — not that it is anyone's business:

The bananas and celery and carrots and potatoes and onions and garlic and mandarins and apples aren't visible in this picture- wasn't thinking about trolley angles, I also buy a lot of fruit from the markets and Denims mum is bringing us fresh fruit from her trees today. Should I post the receipt?

Thankfully, the majority of the comments were other moms either pointing out how adorable Hall's young daughter Snow is or showing solidarity in her call to stop the judgement. One such commenter wrote:

You know... if you wouldn't walk up to someone in person and give them your "opinion" then it isn't an opinion it's judgement... and best kept to yourself.

And, in a coincidence that makes the judgement all the more annoying, much of Hall's writing and social media presence has long been against this very type of shaming. She has used her powerful voice on social media to lift up other moms and remind them that they are more than good enough in posts such as the one featured above.

As ridiculous as the cause for her criticism is, it seems that Hall isn't the only mom to be judged for her shopping list. Another mom commented on the post saying that she recently experienced the same thing:

Who gives a sh*t what’s in someone else’s trolley!! Mine got commented on a few weeks ago through a friend! At first I was pissed off, now, f*ck them!

Unfortunately, mom-shaming such as this is wide-spread and all too common. According to a study posted on Psychology Today, 95 percent of moms report feeling judged for some aspect of their parenting. Additionally, the study found that 77 percent of those moms feel judged by fellow moms in person and 60 percent of them feel judged by other moms online.

This habit of criticizing one another and providing painfully unsolicited advice has got to stop. Speaking out about the hypocrisy — much like Hall did — is an important step in breaking this harmful cycle.