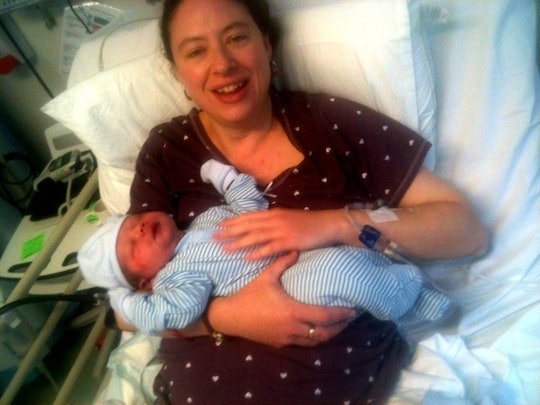 Writer Piper Terrett thinks the pressure to breastfeed babies can be too much for new moms. And as a mom who chose not to breastfeed, she wants other moms who don't to know they aren't alone in their choice. So, she wrote a piece for The Mirror to get out one very simple message: that new mothers should be supported in whatever choice they make when it comes to feeding their babies.

Her message is not only important, but it's one that Terrett has personal experience with. She chose not to nurse her son, who is now nearly two years old, despite giving it a shot when she was still in the hospital following his birth. But she quickly realized it wasn't the right choice for her, and that's totally fine. Every mother needs to decide for themselves what works best for them and their baby.

But Terrett faced backlash even before she left the hospital. Terrett explained in her article that a hospital midwife scolded her for bottle-feeding her son. Luckily, Terrett stood up for herself and told the midwife it was her body, and her choice, and the midwife apologized.

But not every mother may be comfortable confronting an attitude like that. And Terrett wants to spread the word that pressuring moms into breastfeeding isn't OK.

In the Mirror piece, Terrett wrote that mothers are "made to feel they are failing if they want to give it up to bottle or combination feed." She believes it's unfair to pressure moms into breastfeeding when they may already be feeling extremely vulnerable, and dealing with things like a lack of sleep and the total shift in your life that follows having a baby.

"Instead of beating us with a stick about breastfeeding," Terrett wrote, "doctors should be asking themselves why we aren’t doing it."

In the United States, USA Today reported that about 81 percent of moms across the country reported breastfeeding at some point, but that number drops to about 22 percent when it comes to exclusively breastfeeding for six months. In the USA Today piece, issues such as concerns about the baby getting enough milk, the fact that nursing can cause cracked or bleeding nipples, and the fact that so many mothers go back to work not long after giving birth are all cited as reasons why moms stop breastfeeding, or don't ever really start doing it in the first place.

So Terrett made an excellent point in her piece: The focus should be on the reasons why mothers might not breastfeed — not on the idea that the mothers are the ones doing something wrong. Breastfeeding has benefits, sure, but it's not for everyone. And even those who try, Terrett pointed out, don't always find support to continue if they have trouble with it.

"Those who want to give it up...are made to feel guilty by bossy health visitors when they should be congratulated for doing it at all, for any length of time," Terrett wrote:

I've had a number of friends in tears over this, with one told by her health visitor that the baby wasn’t latching on because she was too anxious – when it was the health visitor’s nagging that was stressing her out in the first place.

And more stress is the last thing new moms should have to deal with.

Even the Office on Women's Health's page about breastfeeding, hosted by the U.S. Department of Health and Human Services, noted that every new mom deserves support no matter how they decide to feed their baby. Of course women should be supported if they choose to breastfeed, wherever they decide to do it.

But Terrett wanted to make it clear that making the choice not to breastfeed is fine too. She made that choice, and she wants other moms to know that if they do too, they aren't alone, and that the relationship between mother and baby is the most important thing in the end.