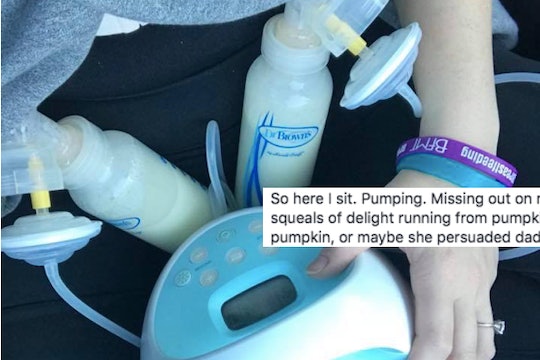 Breastfeeding is not easy for some moms and pumping is just as difficult. There are so many components and elements involved in pumping breast milk and it can be incredibly inconvenient when moms are forced to pump at any given moment. When moms are producing an over abundance of milk, or experiencing hyperlactation, then they know this pumping problem firsthand. So when this mom with hyperlactation said she loathes pumping sometimes, her words can reign true to so many moms out there.

Elisabeth Anderson-Sierra knows just how inconvenient pumping can be. The mom of two young girls, ages 2 and 6 months, runs the Facebook page, One Ounce At A Time, to document her journey with hyperlactation and pumping her breast milk. While Anderson-Sierra's story is incredibly insightful to follow along with, not everything about having hyperlactation or pumping is perfect. Anderson-Sierra's most recent Facebook post, shared to Breastfeeding Mama Talk highlights this.

Anderson-Sierra shared a photo of her breast pump sitting on her lap in a car while her family enjoyed a day out at a pumpkin patch. And in a completely honest moment, Anderson-Sierra opened up about why she sometimes loathes pumping, writing:

Because I have Hyperlactation Syndrome it is a medical necessity that I pump and must bring a pump and supplies with me at all times. Today the plan was to go to a pumpkin patch as a family. Well things came up as they often do and by the time we got to the pumpkin patch it was my time to pump.

Anderson-Sierra continued on about the disadvantages of the timing of her pumping, writing:

So here I sit. Pumping. Missing out on my toddler's squeals of delight running from pumpkin to pumpkin or maybe she persuaded daddy to let her ride the ponies. Missing the first outside steps that my newly 10 month old walker is taking. Missing the family photos and photo opportunities. It truly is a ball and chain sometimes.

The realness of her post is heartbreaking, but other moms can relate to it. In the post, shared to Breastfeeding Mama Talk, women from all over are commenting with their own experiences with hyperlactation and speaking about how pumping can sometimes throw a wrench into life.

But Anderson-Sierra is sort of a super hero in her own right. The mother with hyperlactation made waves this past summer after she donated 600 gallons of breast milk — or 78,000 ounces of breast milk — according to People, in the past two and a half years. Anderson-Sierra's condition makes her produce extra breast milk and therefore allows her to give back to people in need. "This is my way of being active in my community and giving back to humanity, so it's my labor of love," Anderson-Sierra told People.

Anderson-Sierra told People at the time that pumping only took an average of four to five hours a day and that it hadn't really stopped her from doing anything — although she admitted it did add "an extra hiccup" in her life. And although she did tell People that she has no regrets when it comes to pumping becoming an integral part of her life — her most recent Facebook post does show that not everything in life is roses, and that is OK, too.

Anderson-Sierra's post helps bring awareness to her condition and highlights the realities of inconvenient pumping sessions — even for a mom who knows a thing or two about pumping gallons of breast milk a day.

More Like This
Reddit Is Stunned By Mother-In-Law Trying To Breastfeed Her Granddaughter
Please Stop Telling Moms To Breastfeed As Baby Formula Shortage Worsens
What Is Monkeypox & Should You Be Worried? Here’s What You Need To Know
Multiple Jif Peanut Butter Products Have Been Recalled After 14 People Got Sick