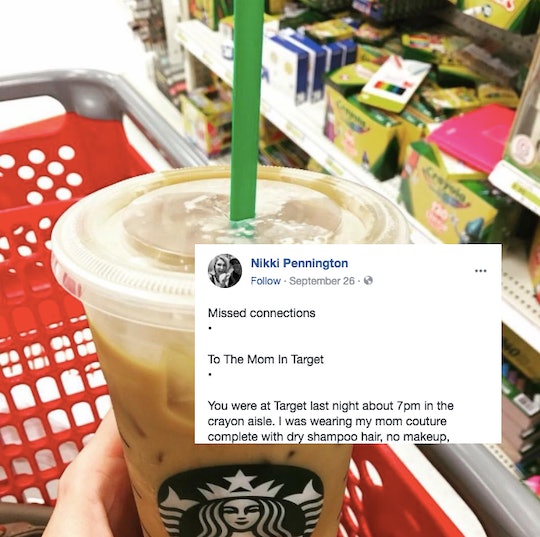 All parents know how difficult and frustrating it can be at times to make friends with other parents. For starters, finding a parent friend with a similar parenting style is often a daunting task, and second, many moms and dads simply don't have the time to seek out their ideal bestie. If you're a parent who struggles or has struggled to find parent friends (don't worry, you're not alone), you'll definitely love this mom's "Missed Connections" message to another mom in Target.

On Tuesday, a mom named Nikki Pennington summed up her quest to find the perfect mom friend in a hilarious Facebook post. Pennington wrote the post in the style of a "Missed Connections" ad on Craigslist, and the message is as funny as it is relatable. The best part? Pennington's story of longing takes place in the ultimate holy land for parents — Target. Uhh, need I say more?

According to Pennington, she was strolling through Target on Monday night when she happened to spy another mom near the crayons, because what's more appropriate or fated than meeting another parent in the school supplies aisle? Although many parents pass each other without notice each and every day, a few things about this mom caught Pennington's eye. For starters, the crayon aisle mom was wearing the same uniform as Pennington — yoga pants with flip flops and a messy bun. More importantly, the crayon aisle mom was drinking a Venti-sized drink from Starbucks, which is an important detail only moms who religiously shop at Target can understand. If crayon aisle mom had been drinking a size Tall, this story simply wouldn't exist.

Pennington described her first sighting of crayon aisle mom, according to Facebook:

To The Mom In Target. You were at Target last night about 7pm in the crayon aisle. I was wearing my mom couture complete with dry shampoo hair, no makeup, yesterday’s T-shirt and yoga pants. You were also wearing yoga pants with flip flops and a messy bun. The venti Starbucks in your hand was a dead giveaway that even though you were wearing yoga pants you had in fact not come from the gym. I know because I was doing the exact same thing #yogapantsarelife

Yep, I think a lot of moms can relate to these descriptors. Wearing yoga pants outside of the gym is totally acceptable, by the way.

Once Pennington registered that she had a potential BFF in her midst, she tried to glean more details about crayon aisle mom in a not creepy or invading your-space kind of way. Pennington ultimately did what all great sleuths do — she tried to figure out the name on her Starbucks cup:

I tried to glance at your cup to see the name of my future BMFF (best mom friend forever) but let’s be honest, at my age I’m on the verge of needing readers to see that far away.

Although Pennington wasn't able to make out the name on the cup, she was able to notice that crayon aisle mom had compiled some amazing items in her cart:

In your cart you had diapers, soda, wine and chocolate. Again, confirming my suspicions that we in fact were meant to be best mom friends.

Sigh. Could crayon aisle mom be more perfect or BFF-worthy?

Unfortunately, neither Pennington or crayon aisle mom made the move to strike up a conversation. Instead, the moms went on to enjoy their "night out," because any shopping trip without kids is the ultimate win for parents:

Our carts hit once as we rounded the corner from aimlessly pretending to be shopping for something in our favorite store when in reality we were both just having a moms night out. I mean we all know that’s where all moms go for a night out.

Although Pennington never got to talk to her potential mom friend, she isn't giving up hope:

So, to the fellow mom in Target last night at 7pm, if you see this and recognize this story and my Starbucks drink please know I’ll be back at Target again next week because lets be honest, I live there. Maybe I’ll see you again, same time, same aisle and this time we can wander around aimlessly in Target together for our moms night out.

Well, you have to admire Pennington's dedication here. Finding parent friends who you really connect with can be so difficult, and it's understandable that she's not giving up easily. That being said, if this world has any justice, Pennington will meet her ultimate mom friend at Target one day soon.