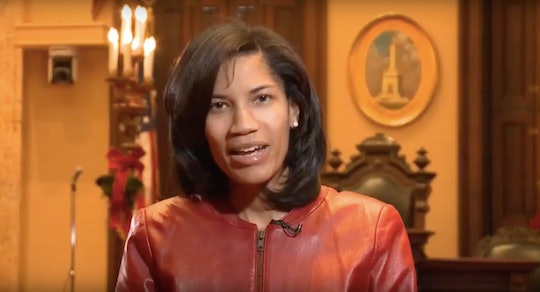 This Baby Girl Goes To Work With Her Councilwoman Mom So Often, She Got Her Own Title

Babies are universally appealing. But when a baby is taken somewhere they aren't usually meant to be — like an office or a Michelin-starred restaurant, for example — people tend to get annoyed or upset. Fortunately, that wasn't the case with this mom's 1-year-old baby, who's now an unofficial council member in Baltimore because she's come to work with her councilwoman mom so often. Not only does this little girl already have a more impressive resume then her future classmates, but she and her mom are spreading such an important message for working moms everywhere.

At Baltimore City Hall, little Rae Sneed has become such a fixture, that the other council members consider her a part of the family. Rae's mom, Shannon Sneed, is a first-year member of the council and cited high costs of child care as one of the main reasons she took Rae with her to work. Speaking to The Baltimore Sun, Sneed explained that even a full-time working family can hardly afford child care. As the newspaper reported, "Child care typically costs more than $16,000 in Baltimore — nearly 30 percent of the median family’s income."

So, Sneed sought out advice from fellow members of the city government, and found that just about everyone was supportive of her bringing little Rae in with her.

But before she got the go-ahead to bring Rae into work, Sneed was concerned. "I thought no way they’re going to allow this baby in City Hall,” she told The Baltimore Sun. But, she was surprised when the Council President said to her, "'Where’s the playpen? …. You can have her here,'" according to the publication. "That’s what made me feel comfortable... I thought, 'You can do this.'"

And she has. With Rae by her side, Sneed has spent her first year as a city council member fighting for working families, working to raise the minimum wage, and protect service workers, according to U.S. News & World Report. But it isn't always easy. When Sneed and her husband decided to take turns watching Rae, she was just a baby who mostly slept.

Now that she's a little older and getting fussy, Sneed says it can be a hassle. Luckily, though, her colleagues are happy to help. "It always seems like someone in the community or audience says, 'Can I take her? Can I hold her?'" Sneed told The Baltimore Sun. "It’s always worked out. She starts squirming and someone will volunteer to hold her."

She’s a part of our family. If you notice, everybody around tries to pitch in and help out with the baby. When Councilwoman Sneed tries to take her home, I say, "Where you taking her?"

And little Rae is doing more than making rounds with her; according to U.S. News & World Report, the 1-year-old is somewhat involved in Sneed's job. "Rae has a habit of crying out when witnesses testify against bills her mom supports," the publication reported. "One councilman jokes that Rae has a better attendance record than some of his colleagues."

It's really nice that Sneed's workplace has been so welcoming and accommodating, because being a working mom is a hard. But having colleagues who understand the struggle, want to help out, and even enjoy having your child around must make it a whole lot easier. So, congratulations baby Rae on your position as an honorary city councilwoman. And good on you, Sneed, for fighting the good fight.