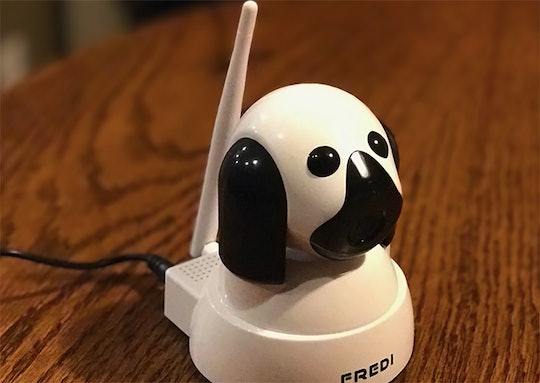 When you go to pick out a baby monitor, the last thing you probably think about is the device's potential to get hacked. Most parents prioritize convenience and price when selecting a baby monitor, and rarely do people think about the frightening implications of a Wi-Fi connected device. And to be fair, it's understandable that parents don't often consider security vulnerabilities when shopping for a baby monitor. Not only are soon-to-be parents overwhelmed with other responsibilities prior to giving birth, but not many people (myself included) realize how easy it is for a hacker to access their IoT (Internet of things) devices. Case in point: This mom's baby monitor was hacked, and she had no idea that this terrifying breach of security could ever happen to her family. Although this mom's story is undeniably scary, rest assured there are simple ways for families to protect themselves from hackers.

Jamie Summitt, a stay-at-home mom in South Carolina, recently purchased a FREDI video monitor via Amazon to help her keep an eye on her infant son, Noah, according to the Daily Mail. The monitor — innocently shaped like a dog — was a godsend to Summitt at first due to its Wi-Fi capabilities. After Summitt received the device, she downloaded an app that allowed her to easily watch Noah on her cell phone, according to ABC News. The best part about the FREDI device was that Summitt could control it via her cell phone. So, if Summitt wanted to check in on Noah's bassinet, for instance, all she had to do was swipe her finger to move the FREDI camera in its direction. Additionally, Summitt's loved ones were able to download the app as well, meaning that her husband, Kevin Summitt, and sister-in-law could all check in on Noah throughout the day. Sounds convenient, right?

Summitt's love affair with the FREDI device abruptly ended one Wednesday morning when she noticed someone moving the video camera towards her bed, according to NPR. Although Summitt didn't think too much of it at first (her family members have access to the camera, after all), she realized something was wrong when the video panned to her bed again later that same day. "I looked over on my phone and saw that it was slowly panning over across the room to where our bed was and stopped," Summitt recalled, according to NPR. Amazon and FREDI did not immediately respond to Romper’s request for comment.

The frightening part about the second incident is that everyone who had access to the device was at home with Summitt at the time it occurred — meaning that a stranger had hacked into the monitor. Summitt's suspicions were confirmed when she got locked out of the app following the discovery, suggesting that the hacker heard her conversations throughout the ordeal. Of course, Summitt was horrified by the breach of security, especially since she often breastfed Noah on her bed.

I’ve been debating on whether or not to make this post, but have decided to go ahead in hopes that it prevents anyone else for having to go through this. Please be kind in your comments...we are all very raw and sensitive right now ... If you have this baby monitor do yourself a favor and unplug it and throw it away RIGHT now ... I hesitated to share this for obvious reasons of how personal this is but I can’t imagine any of my friends having to go through this. Again, PLEASE check your security settings on your monitors as well as your WiFi and if you have this model throw it out immediately.

Summitt also touched on how this incident has affected her as a person. Summitt added, according to Facebook:

I feel so violated. This person has watched me day in and day out in the most personal and intimate moments between my son and I. I am supposed to be my sons protector and have failed miserably. I honestly don’t ever want to go back into my own bedroom.

Wow — my heart goes out to Summitt. No one deserves to have their personal privacy violated ever.

Although the police couldn't do anything about the hack, there are ways for Summitt (and other parents) to better protect herself going forward. First off, make sure your wireless network is secure. Be sure to customize your network name and password, and make sure your internet router is using data WPA2 encryption.

Additionally, opt for a frequency-hopping spread spectrum (FHSS) monitor. An FHSS spread can "help prevent" strangers from accessing your monitor because it randomly hops "frequencies at an incredible rate," according to Stay Safe Online.

Lastly, always buy your monitor from a well-reviewed and trusted company. While all IoT devices are susceptible to hacking, there's a better chance for safety if you buy from a reputable source.

The main takeaway here is to be vigilant about your baby monitor's security. Although it's unfortunate that busy parents have to worry about something so scary, it's a real threat that affects many innocent people. Hopefully, Summitt's brave account will help other parents in similar situations.