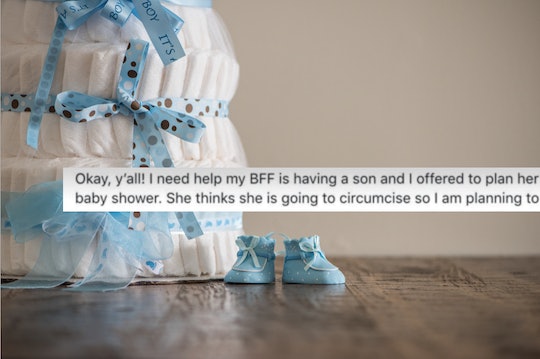 Before my husband and I found out that we were having a girl, one of my biggest stressors was determining whether or not we would circumcise a son. Fortunately, I had a very supportive friend group to talk it through. Not everyone is so lucky. This mom's BFF tried to turn her baby shower into an anti-circumcision intervention and the friend posted to Facebook for advice on how to theme it. Not surprisingly, she received more criticism and hounding than actual advice from the comments section.

Controversial parenting topics like circumcision and immunization can cause a rift in even the strongest of relationships when the two parties disagree. But sometimes, rather than present their argument calmly and clearly, people opt for Kamikaze persuasion. One woman feels so strongly opposed to circumcision that she decided to use her best friend's baby shower as a podium for sharing her views. Yikes.

Ok y'all! My BFF is having a son and I offered to plan her baby shower. She thinks she is going to circumcise so I am planning to theme the party-ish around NOT circumcising her perfect boy.

She goes on to explain how she will work her "theme" into the party, including an anti-circumcision ankle band for the baby boy to wear following his birth. Lucky guests will be gifted anti-circumcision bumper stickers wrapped around Yankee Candles. "I need other ideas on how to subtlety include this at her baby shower so it opens a dialogue with her family too and maybe she'll think about it," she said.

Well, ideas weren't exactly what she got. But hey, beggars can't be choosers, right? As usual, the commenters had sarcasm to share and they did not hold back. One commenter explained that her son is basically a human Hot Pocket:

She should absolutely intervene! My precious son is still intact. As a matter of fact, I have stretched his foreskin so that I can tuck his entire body into it thus creating a human cocoon of flesh. Know better, be better

Another suggested that she aim to be even more subtle and just steal the baby:

A real friend would show up at the hospital and kidnap the baby before the circumcision. That’s really the only subtle way to do it. Her friend will thank her later. #knowbetterdobetter

The circumcision debate is a complicated one for many reasons. Parents who choose circumcision often do so for religious or social reasons, concerns over cleanliness, and efforts to keep their child healthy. Roughly 55 to 65 percent of all newborn boys in the U.S. are circumcised each year, according to Kids Health. Those who do opt for circumcision may do so because of the American Academy of Pediatrics' 2012 declaration that the benefits of male circumcision outweighed the risks. While the AAP did not recommend that all males be circumcized, it did state that the options should be available to everyone and the procedure should be covered by insurance.

Despite these statements, many parents are choosing not to circumcize their children, creating the anti-circumcision movement. Opponents point out that there is little evidence to support claims that circumcision prevents disease. Additionally, Intact America, a large scale anti-circumcision organization lists personal choice, pain, and changing social attitudes among its reasons to reconsider.

The anonymous Facebook post certainly didn't provide a conclusion to the circumcision debate, but one commenter raised an important set of questions:

Is there any way that we can get an update on how this baby shower goes? Does anyone know the mother to be? Can I get an invite? Can we get pictures? My life will never be complete until I find out what happens...

All jokes aside, decisions like whether or not to circumcise are very personal ones and I think we can all agree that a baby shower is not the place to hash out philisophical differences. Hopefully the mom in this story wasn't too traumatized.