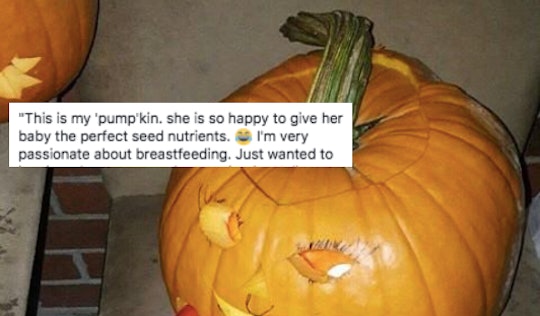 This Viral Photo Of A Breastfeeding Pumpkin Is Making Moms Scream "YAAS!"

Despite a global effort to make it not so, breastfeeding — specifically in public — remains one of the more taboo aspects of motherhood. Many celebrities and modern mothers alike have made an effort to change that. One perfect and seasonal example of this is one mom's breastfeeding pumpkin that has gone viral, largely for its role in gaining attention to this movement. No matter the season, normalizing breastfeeding is a cause worth taking up.

The now-viral photo created by mom Taylor Tignor was first posted to the popular motherhood Facebook page "Breastfeeding Mama Talk" on Sunday. The caption for the photo explained that the pumpkin artists' message:

This is my 'pump'kin. She is so happy to give her baby the perfect seed nutrients. I'm very passionate about breastfeeding. Just wanted to inspire other mamas to be creative for Halloween.

Commenters on the post asked permission to recreate the idea and were met with strong encouragement. Others pointed out the power of the post as a tool for raising awareness of the commonality of babies preferring one breast over the other, as it shows a baby pumpkin latched on one side and a pump on the other. One such user commented saying that she is experiencing the very same thing.

"This is seriously my life right now. My baby girl is 4 days old and refusing my left boob," the user commented. "So officially pumping it... And giving her my right. I've been going crazy all day. But man, this here has me dying!!! I love it. It's made me feel so much better. Thank you to whoever did this!"

Another breastfeeding mom was behind the idea of others recreating the pumpkin and placing it outside of their own homes, writing, "This should be on the door of a breastfeeding mama to raise awareness to those not aware of this phenomenon."

It is true that many babies do seem to prefer to feed from one breast over the other, leading mamas to pump the less desirable breast in order to stay "even." The "phenomenon" as the commenter called it is both prevalent and completely normal. Many experts have weighed in to say that the reason behind the preference generally just comes down to favoritism. There may be subtle differences in the breast, such as nipple shape, that make it easier to feed on, according to HuffPost.

Along with painting a picture of breast preference, this post also serves as a means of promoting breastfeeding in general. The post's caption closes with the hashtag, #NormalizeBreastfeeding. While the concept has been around since the '70s in breastfeeding groups like the La Lache League, the modern version of the Normalize Breastfeeding movement was founded in 2014 by Vanessa A. Simmons, according to the movement's official website, in an attempt to promote a worldwide goal of making breastfeeding a normal thing.

Despite the good-natured meaning behind the pumpkin and the post, not all fans were pleased with the message that it came with. One such user wrote, "I breastfed my son for 8 months, could've went longer but chose to stop... This is not 'normalizing breastfeeding,'" adding, "Women have breastfed since the dawn of time. This is sensationalizing breastfeeding."

Unfortunately, the simple knowledge that people do breastfeed is not what needs to be normalized. Much of the Normalize Breastfeeding movement is about getting people comfortable with the idea and image of women breastfeeding so that moms are no longer sexualized and stigmatized into breastfeeding in hiding — such as in restaurant bathrooms or pumping in closets at work.

While the pumpkin itself is a lighthearted take on the effort, the comments on the post show just how much these kinds of images mean to moms who are breastfeeding and want to feel free from judgement. I don't know about you, but I think that I just found some jack-o-lantern inspiration for this year.

More Like This
Chrissy Teigen Felt More Shamed For Using Formula Than "Pulling Out My Boob" In Public
Over 10,000 Sippy Cups & Bottles For Toddlers Recalled Due To Lead Poisoning Hazard
The Internet Cannot Agree On How To Handle A Toddler Not Using Headphones On A Flight
"Corn Kid" Handed Out Over 40,000 Cans Of Corn At A Food Bank Ahead Of Thanksgiving