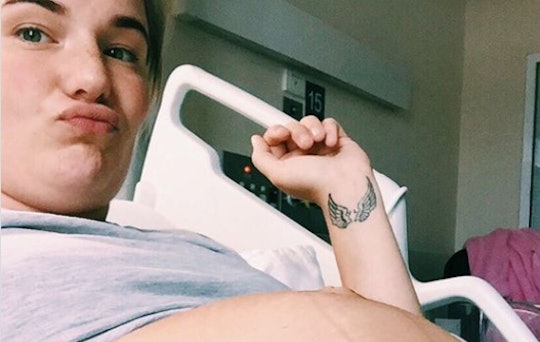 Pregnancy, birth, and parenthood are not competitions, but far too many people haven't gotten the memo. C-sections in particular seem to draw a lot of judgment and one-upmanship, and at least one postpartum parent took on that judgment in the most honest way possible way. A mom's now viral C-section selfie proves they aren't the "easy way out," and it's pretty incredible.

For the record, a Cesarean is actually a major surgery. Although it might be hard to believe, there's actually no easy, painless way to remove one human from another. Aside from the fact that plenty of moms still go through a fair amount of labor and pushing before ending up with a C-section, having your torso dissected while you're awake isn't exactly a picnic. Australian blogger and mother of two Olivia White wanted to make sure people understand that.

This is what you really look like a few hours post C-section. To anyone who thinks it's the easy way out, well try having a 6 inch gash in your abdomen like a gutted shark who had the body parts of the surfer it ate retrieved!

She then went on to detail being "sewn back together with fishing wire," feeling like she'd been hit by a bus (twice), and resigning to wearing "nanna knickers" for the rest of her life. Still, she concluded, she wouldn't change a thing, because "if it wasn't for the ability to deliver my babies this way they might not be here today." Click through to read the full remarks, which are hilariously honest.

Although it's true that C-sections generally require less effort from moms than laboring unmedicated in pool, for example, it's a serious procedure. As Yahoo Parenting graphically describes, it all starts with inserting a catheter in the mother's urethra, followed by a spinal block — that's anesthesia, and you can guess where the needle goes. After that, there's no pain for a while, but most moms report feeling tugging and shifting, or even a sensation of "unzipping," as doctors cut though their skin, fat, muscle, connective tissue, and uterus. Fluids are vacuumed, organs shoved aside, and after the baby is out, the mom's still in the operating room for another 30 minutes being reassembled.

Once the anesthesia wears off, prescription pain relievers reduce the pain of that six-inch slice to a dull ache. In my experience, keeping on top of the next dose isn't always a priority for the hospital staff, so you need to set an alarm and hit the call button 30 minutes early, every four hours, for the next three or four days. Most facilities won't discharge patients until they've passed gas and/or had a bowel movement, and nurses have no problem inquiring about these activities while mom is entertaining visitors. Once home, you'll need to keep a throw pillow handy to hold against your abdomen when you cough or sneeze. You'll still bleed for six weeks like your "natural birth" friends, but with the added bonus of not being allowed to drive or lift anything over ten pounds during that time. None of this is to discourage C-sections; I had one and I wouldn't have done it any other way. But are they easy? No way, and let's say a collective thank you to White for highlighting that. It's parenthood; nothing will ever be easy again.