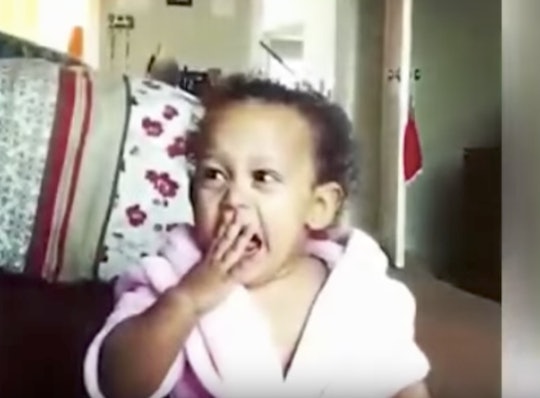 After long days of taking care of a toddler and juggling an endless list of other household and professional responsibilities, every mom could desperately use some "me" time. Maybe that means a late-night Netflix binge or an at-home spa treatment. But that much-needed relaxation morphs into the opposite of chill when it seriously freaks out your kids, as this mom whose facial mask terrified her toddler found out the hard way.

While the video of the incident recently shared by The Daily Mail doesn't identify the mother-daughter duo tangled up in the skincare session-turned-horror story, it's just as well because, really, this could be any mom.

The quick clip starts off innocently enough, with the mom and her tiny daughter sitting next to each other. They're both wearing bathrobes, indicating that the plan was obviously to have a stress-free day filled with relaxation and rejuvenation. But the mom is also wearing a charcoal bamboo face mask, and her daughter does not appreciate the new look when her mom turns to her. And, you have to admit, it would be pretty scary if the person you thought was your mom suddenly became unrecognizable, right?

So, it's pretty unsurprising, albeit pretty hilarious, that the girl immediately breaks into tears, despite her mom's earnest reassurances of "What's wrong?" and "It's OK!"

The mom clearly knew just was what wrong, though. And for her little girl, the situation was anything but OK. After the mom laughingly warns other parents not to pull this little prank on their own kids, she turns the camera back to her daughter to show her with her hand plastered over her mouth in terror.

When used by a toddler, the hand-over-the-mouth thing is 100 percent adorable. But it also communicates that she's totally distraught. Just like all those children who fell victim to late-night host Jimmy Kimmel's long-running gag of encouraging parents to tell their kids they ate all their Halloween candy, or the kids who were disturbed by Snapchat's creeeeepy new filters a couple years ago when checking them out with their parents.

With this little one's terrified tears, this video joins the ranks of the other kiddos totally freaked out by their parents' crazy, incomprehensible antics. And, yup, it's safe to say that some moms may want to leave their toddlers out of it when they need so do something freaky like apply a face mask — or at least give the kids a little warning first.