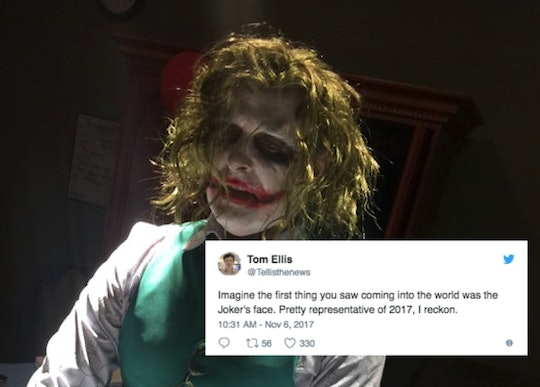 This Mom’s Doctor Delivered Her Baby Dressed As The Joker, & The Photos Are Freaky AF

Many parents go into the delivery room expecting the unexpected, because giving birth is an experience filled with unpredictable variables. One thing parents can typically expect, however, is that their doctor won't be dressed up in a spooky costume. It's just not a thing that happens, right? Well, it looks like parents should add "doctor in costume" to their list of delivery room possibilities, because one mom's doctor delivered her baby dressed as the Joker. And yes, the photos of the delivery are just as eerie as you'd expect.

On Halloween, Brittany and Justin Selph welcomed their daughter, Oaklyn, into the world, according to People. The birth, which took place at a Henry County Medical Center in Paris, Tennessee, was as routine as any birth could be, except for one small detail: Brittany and Justin's obstetrician, Dr. Paul Locus, was dressed up as the Batman villain the Joker during the entire delivery. If you're having trouble visualizing this scenario, let me paint a picture for you. A man dressed as one of the most chilling villains of all time (scarred smiley face, wild yellow and green hair, blackened eyes), stood over Brittany as she gave birth to her daughter. Of course, it's safe to assume Locus, aka the Joker, was holding medical supplies in his hands as he assisted with the delivery, which just adds another layer of spookiness to the scenario. The good news is Brittany and Justin were totally down for the Joker-inspired delivery, which is so cool.

Justin tells Romper in a message:

My wife's due date was Nov. 5, but Oaklyn had other plans. Brittany woke up Halloween morning to her water leaking. Not wanting to make the other children, Brenden and McKinley, miss their Halloween parties, she elected to get them off to school. She's a little hard headed and stubborn sometimes, and thinks of the kids before herself always! Finally, we went to the hospital around 12:30p, and checked in. Brittany's Doctor, Dr. Paul Locus, came in to meet with us, and check things out. That's when we found out he was dressed for Halloween that day, as the infamous Joker. We couldn't help but laugh, when he walked in the room! My wife, being the open-minded woman, with a sense of humor, thought it would be hilarious to have such a unique delivery.

The best part? Locus left the hospital to hand out candy before Brittany was ready to deliver Oaklyn, according to ABC News. Locus later returned to the hospital decked out in his Joker garb, because that's what cool doctors do. Check out the Joker's delivery below:

Hmm, I wonder if Locus asked Oaklyn, "Why so serious?" when she came out crying. Also, I'm really hoping Brittany and Justin dress up Oaklyn as the Joker for her first Halloween — I can't think of a better homage to Locus and this amazing delivery.

There my wife is, staring the Joker straight in the eyes while delivering our baby, what a sight! I was holding her leg up, and snapping pictures! I was going to go Facebook Live, but the nurse cut me off! Haha. Dr. Locus was a great sport about the whole situation, and took photos with our family. The next morning, he came in to check on Brittany, and he said "Sorry I couldn't make it in last night, glad to see the delivery went well." Joking of course. He also gave her a card of congratulations, and he signed it "Dr. Joker."

See the Joker's congratulations card and the happy Selph family below:

And as expected, a lot of parents are absolutely loving this story, especially those parents who also gave birth on Halloween:

Of course, there were a few people who weren't into the idea:

It goes without saying that Brittany and Justin's opinions are the only ones that matter here. Brittany and Justin had a great birthing experience and it sounds like Dr. Locus was a wonderful doctor throughout the entire experience. Plus, Oaklyn will have these cool pictures to show off for the rest of her life — few (if any) kids can brag that they were delivered by the Joker.