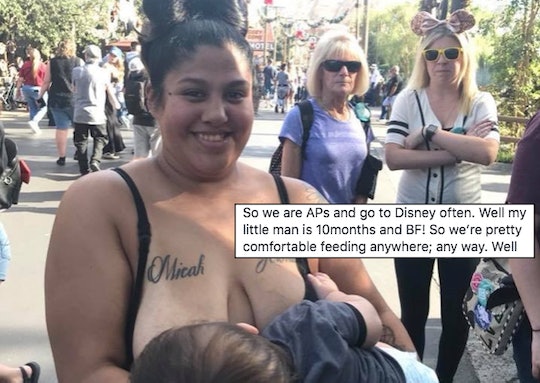 Since it's 2017, one would assume the general public is aware that milk comes out of breasts and that babies need milk to survive — so breastfeeding, well, it's gonna happen. Babies need food. And moms feed them. That's just how it works. Despite these indisputable facts of life — along with the fact that breastfeeding moms are protected by law to feed their babies wherever they are legally allowed to be — there are still people who are offended by lactating breasts and feel the need to voice their disgust. However, this mom's epic response to the women who shamed her for publicly breastfeeding at Disney is too perfect.

On Sunday, Brittni Medina shared a photo with the Breastfeeding Mama Talk Facebook group, along with caption that explained her recent shaming experience. The California mama, who has Disneyland season passes with her husband, wrote, "So we are APs and go to Disney often. Well my little man is 10months and BF! So we’re pretty comfortable feeding anywhere; any way. Well these ladies were so angry by it my husband just had to take a picture. Peep the haters. Characters of the day. Just had to get a picture!"

First of all, how can anyone possibly be that angry while at Disneyland and wearing rose gold Minnie Mouse ears? It seriously looks like the shamers are exaggerating their disdain just for this photo op.

"I actually stepped a little over to get them in the picture because they were talking loudly saying how I should go to the restroom to feed," Medina told POPSUGAR, of the photo. She continued:

I was happy my husband could capture me and my son happily feeding and I thought the looks on their faces were priceless. I mean, how could they be so mad?

For being part of a breastfeeding support page, a few commenters even got bent out of shape over Medina's post on Breastfeeding Mama Talk. "You can 100% nurse without pulling your entire breast out," one person wrote. "Your [sic] clearly seeking attention by taking a picture.. Im [sic] all for nursing in public uncovered... but you do not have to pull your entire breast out seriously it can be done without doing so." Um, just no. Moving on.

Another person chimed in with, "There’s a time and place for everything. I understand a child needs to be fed but perhaps in a crowd at Disneyland isn’t the best place? Then to shame people simply for having an expression on their face while you act as though you are morally superior. Not cool." Actually, you know what's decidedly not cool? Opting to delay feeding your baby and instead letting him scream in a public setting. I'm sure everyone would have loved that.

Still, there were plenty of mamas that offered words of solidarity to Medina. "That is what boobs are for," one mom quipped. "No one else's business. Good for you, for not letting them intimidate you." Another sensible person pointed out, "You see half naked teenagers all the time at Disneyland wearing booty shorts and nasty crop tops and nobody blinks an eye but you see a mother feed her child and suddenly it's a big issue. People seriously need to grow the FUUUUUUUUUU** up and understand boobs are for feeding a child." I couldn't have said it better myself, actually.

Look, I've breastfed three kids. So I can attest to the fact that many babies don't appreciate being covered up while trying to eat. All of my nurslings would fling off any blanket/cover I attempted to use. And if I kept attempting to cover them, they would detach from the nipple, causing milk to spray everywhere, and loudly protest. Ultimately, this would draw even more attention to the fact that I was breastfeeding. Not to mention, the likelihood that someone would see a stray nipple with a pissed-off baby is way higher than if I just fed the kid without a cover.

So no, random stranger who is offended by a mother feeding her child, we will not cover up. We will not retreat to a germ-infested restroom. We will not spend all of our days at home, for fear that someone might feel uncomfortable by our public breastfeeding. You are the one who has a problem with something that's perfectly naturally — and not to mention, perfectly legal. So the burden to change is on you. Simply look away if you're so horrified.

In an update on her original Facebook post, Medina explained the circumstances that led to her photo. "I was standing in a very long line to get our picture taken my son got hungry and I wasn’t going to wait in another line again," she wrote. "So I took off my first top and nursed. These women were making snarky comments so I moved from my spot to catch a picture with these characters. Not for attention for me but attention to the fact NO WOMEN SHOULD BE SHAMED FOR FEEDING THEIR BABY UNCOVERED."