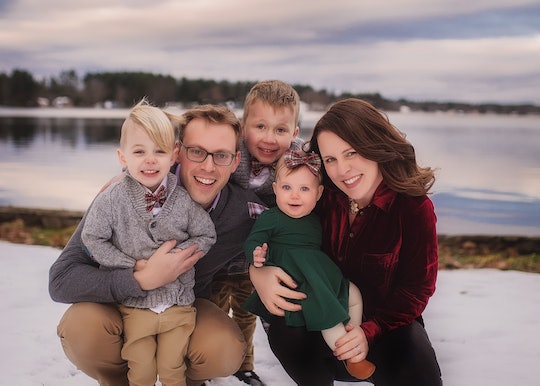 It’s not news that motherhood is hard. From before you have the first ultrasound until after your children graduate college, parenting doesn’t stop. But one mom’s Facebook post about expectations for working mothers shows that 3 a.m. diaper changes are just the start of a long and winding journey called motherhood.

Sarah Buckley Friedberg, 35, authored a 15-point bulleted list on Facebook sarcastically but effectively summing up the responsibilities society expects mothers to undertake after a stressful day with her kids. The mother of three, who tells Romper in an email exchange that she also works as a microbiology manager for a medical device company, had just sat down to pump after a massive tantrum from one of her kids at dinner when she wrote the Facebook post that has since gone viral.

The post touches on everything from the short duration of maternity leave to healthy eating, breastfeeding, mental health care, body image, and doctor’s appointments, showing just how strenuous parenting can be, as People noted.

"Keep your mind on work, and not your tiny helpless baby that is being watched and cared for by someone other than you. Make sure to break the glass ceiling and excel at your job — you can do anything a man can do! It is your job to show society this!" Friedberg began. Succeed at work, breastfeed, get enough sleep, decorate your house, maintain your family’s appointment and party calendar, eat and cook healthy meals, the list goes on and on.

"Remember the dog you got before you had kids? She's getting old now and needs expensive surgery," Friedberg added. There are also school conferences, volunteer requests, and birthday parties to attend to, she reminds everyone. Among everything, don’t forget to enjoy your kids and love every minute of the stress.

"I don't know about you, but I'm ready to lean OUT. Thanks for coming to my Ted talk," Friedberg concluded the post.

The post, which has received over 71,000 reactions and 65,000 shares on Facebook since it was posted on April 18, seems to have resonated with many mothers on social media.

"When you spell it out, there is so much to process and think and manage," one Facebook user shared in response to the post. "It comes down to what you are willing to say yes to, because that means you say no to something else."

"This exhausted me and made me realize why I’ve been tired for my entire life," another person commented.

Among the comments are also "amen," "nailed it," and "SO accurate!"

Friedberg tells Romper by email that she has received "amazing" support and countless positive messages since she shared her experiences on social media, and that she has largely ignored who have turned to criticizing the post and her decision to be a mother.

Some also wondered if the mother of three had any help at home after judging the size of her to-do-list, as USA Today noted. Friedberg confirmed that while her husband, a pediatrician, has no problem picking up the slack around the house, societal pressure on mothers is different from expectations put on dads. "When one of the kids is sick at school, they call me first," Friedberg tells Romper. "I don't think he has been asked to volunteer with the PTA."

"We all have hard days, and we all have to prioritize. We cannot possibly have the perfect house, perfect body, perfectly dressed kiddos, perfectly healthy balanced meals every night," Friedberg tells Romper about the disproportionate pressure put on women. "We have to pick and choose. And at the end of the day, if the kids were fed and loved, we are doing a great job. Everything else is just a bonus."

More Like This
The “Tripledemic” Is Scary, But I Feel Less Helpless When I Wear A Mask
The 4 Main Parenting Styles & Which Is Best For Kids
Here Are Parents' Top Trending Searches In 2022, Because Google Really Is Our BFF
Viral Reddit Post Asks If A Toddler Can Watch Cartoons Without Headphones On A Plane