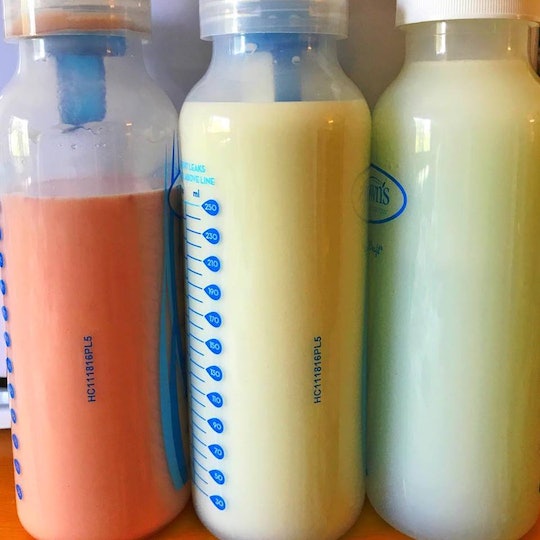 While the milk that you pour over your cereal may always be bright white, breastmilk isn't quite so monochromatic. Depending on when it comes out, it can come in a variety of colors — not all of them are variations of white. This mom's full spectrum photo shows the many shades of breast milk because your "liquid gold" doesn't always look the same — and that's okay!

Nursing moms may not see enough of their milk to know what color it is, aside from that lovely bit that leaks out of the opposite side or comes out as spit-up post-feeding. But if you were to pump instead of just breastfeeding, you would see that milk from various stages of pumping, as well as times of day, affect the color of your milk. Diet, medication, and a number of other factors can influence the color of breast milk, according to Very Well Family, and there are a lot of different shades of "normal."

In order to raise awareness of what these colors can look like, a breastfeeding mom and the voice behind the popular Facebook and Instagram page, One Ounce at a Time, Elisabeth Anderson-Sierra, appropriately posted a photo of three bottles of her milk on July 4. These bottles all came from one pumping session, she told Cafe Mom, and were red, white, and blue respectively.

The red milk is often referred to as "strawberry milk," and as Anderson-Sierra explained it is tinted red by blood in the milk. As breastfeeding.support reported, the red tinge can come from a clog being dislodged and rupturing a blood vessel — as it was in Anderson-Sierra's case — a cracked nipple, or “rusty pipe syndrome,” which is when ducts and milk supply cells grow and stretch after your baby is born. Anderson-Sierra told Romper that she "wanted to share that most likely, any color variation experienced is normal, though having blood in your milk (strawberry milk) is alarming, it is still safe to feed to your baby." However, moms may want to seek medical care to find out the source of the blood if they are concerned. She wrote:

If it is nipple damage, seek treatment options. If it’s within the breast tissue, use gentle massage and a cold or warm compress depending on if you need to reduce swelling or get milk to release from ducts. Keep your milk ducts clear and empty! Blood can coagulate and cause additional clogs, leading to more serious problems.

Amy Barron Smolinski, MA, ALC, CLC Executive Director, Mom2Mom Global — a national nonprofit organization dedicated to support, education, and advocacy for breastfeeding military families — told Romper that pinkish or brownish tinged milk is not generally a concern, as long as it comes out of the breast that color:

The only time pink milk is a medical concern is if it comes out of the breast looking like "normal" — white, yellow, creamy, or thin bluish — and changes to a bright pink or magenta color over time after being expressed. Sometimes this is seen in bottles of expressed milk, sometimes the parents will notice the burp rags are stained with pink after baby has spit up on them. This can indicate the presence of Serratia marascens, an infectious bacteria that requires antibiotics.

The white milk shown in the photo is less surprising, and a bit of blood seems plausible for red milk, but where in the world does blue breast milk come from? Well, Anderson-Sierra has an answer for that too. She explained in her post that this blue milk is "foremilk" or the first milk to come out during a feeding session. It "can have a blue tint to it as it is lacking in the heavier fat content of hindmilk," which is the milk that comes at the end, according to her post. Additionally, she wrote that if you consume "...foods with dyes like Gatorade or colored frosting you may see the dyes affecting the color of your milk."

Smolinski told Romper that there is another possible explanation for "bluish" milk: higher water content. "[This] is common when the baby needs more hydration, such as hot weather, or desert conditions," she says. "It's usually thinner and watery." Smolinski added that "it's important for parents to realize that even though this milk has lower fat content than more yellowish or creamy milk, it is still very beneficial for the baby." Like Anderson-Sierra, Smolinski assured Romper that slightly colored milk is usually "completely within the spectrum of normal." But, if a parent has any concerns, she urges them to contact a trained lactation professional.

Along with the colors that Anderson-Sierra included in her post, Very Well Family reported that breast milk can be tinted white, yellow, clear, blue, green, pink, orange, brown, and black — wow, talk about variety. Not all of the colors of breastmilk are completely normal, though. For example, black breastmilk is the result of a particular antibiotic that should not be taken while breastfeeding, according to Very Well Family. But Anderson-Sierra is urging moms not to panic over milk that looks a little out of the ordinary. Don't throw it out just because of a little bit of red color. After all, "Breast milk is truly liquid gold and we work hard for it. A labor of love, blood, sweat, and tears."