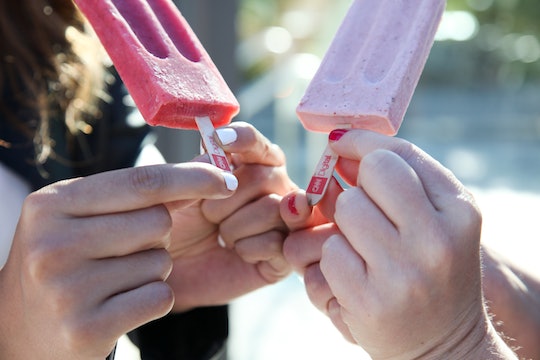 This Mom's Chore Hack Is Brilliant

Teaching kids about something as important as responsibility can seem like a really daunting task for parents. Raising good, respectful, productive members of society can cause just a little bit of anxiety sometimes, understandably, and teaching responsibility is a big part of that. Parents come up with all sorts of ways to teach it, and to be fair, most are probably pretty valid. But this mom's hack for teaching her kids responsibility is particularly brilliant.

Writer Donna Scaramastra Gorman did a piece for The Washington Post published on Tuesday entitled, "Teaching my kids to be responsible and appreciative, one Popsicle stick at a time." Sounds intriguing, right?

In the article, Gorman outlined the fact that she works from home, and that most of the time, people are envious of that fact. But in the summer, "home" gets just a little more hectic with all her kids around much more often, and she came up with a way to introduce a bit more structure and responsibility to their days.

Gorman explained that her four kids range in ages from 8 to 17, and are all old enough to help out around the house in different ways. So, she set up a system to teach them to do just that.

Gorman came up with a plan to make this season a "Popsicle stick summer" for her kids. She explained in the piece that her kids don't do as many chores during the school year, "but it’s time they learned." So she developed a system in which she purchased lots of oversized Popsicle sticks, and labeled each one with a chore before stuffing them into a jar.

She then told her kids that each morning, after swim practice, breakfast, and summer school assignments, they’ll each take two sticks from the jar and do whatever tasks are written on the sticks. Simple, easy, and effective.

Gorman explained that she wants her kids to take notice of things that need to get done around the house — things they take for granted that she and her husband have always handled. And there is plenty of data that backs up the importance of assigning kids chores, the way Gorman does with her children.

For example, according to SheKnows, a 20-year study by the University of Minnesota found that for kids, doing chores at an early age — as young as 3 years old — is "the best predictor for growing up into a young adult with a completed education, a career with a clear direction, and healthy personal relationships with family and friends." That's pretty impressive, to say the least.

Good Housekeeping also reported that kids who do chores are more successful adults. That onclusion was based on information from Julie Lythcott-Haims, the former dean of freshmen at Stanford University and the author of How to Raise an Adult. She also recently gave a TED Talk about her research on the subject of raising successful kids.

There are plenty of guides to teaching kids responsibility and life skills out there. But Gorman's method sounds especially fun, and it sounds like it's really working out for her and her kids. Her children are generally doing the chores they're assigned, and are learning that, if they do things like interrupt her workday for minor issues or as a result of a fight with a sibling, they have to take another stick and do another task.

Her hope is that, with this new system, not only will her kids learn to step up their game when it comes to helping around the house, but that in taking part in regular, routine chores, "my children will be a few steps closer to becoming responsible, independent adults."

And that's a worthwhile goal for any parent and family.