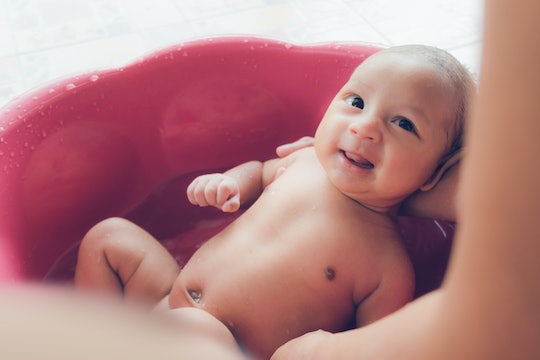 Sometimes, desperate times call for desperate measures. And when one mom had a congested baby on her hands, she turned to an herbal solution to fix the problem. This mom's herbal bath remedy caused a "snotpocalypse" that is equal parts gross and fascinating, and you've got to see it and hear her explanation for it to believe it.

In June, Brianna Whedbee apparently had a baby who was all stuffed up on her hands. In order to help her baby get all the crud out of his nose, she came up with a creative solution. Whedbee reportedly took a few drops of both eucalyptus and peppermint oil and added them to a warm bath, as well as "less than a handful of each" of peppermint leaves, mullen flowers, elder flowers, and chamomile of herbs sprinkled into the water as well. It might seem a little "crunchy mama," but apparently, the remedy did the trick.

Romper reached out to Whedbee for comment about her remedy, but did not immediately receive a response.

Whedbee wrote in the comments on a now-viral post on Facebook that she "ran hot water only at first and kept the bathroom door closed so I could keep the steam in," then apparently plopped her infant son who was congested into the water. The results of Whedbee's DIY remedy are admittedly pretty gross, but honestly, at least it looks like it worked. See for yourself in the photo below.

Sure, Whedbee's remedy is a little unconventional, but look at all that snot coming out of that baby's nose. It clearly did what she hoped it would do, and hopefully her baby felt a lot better after getting rid of all that congestion and mucus he had going on.

If you're a parent who's also dealt with a congested baby and been at a loss when it comes to what you can do to help them, Whedbee's remedy may be worth a try.

But just as a note, some essential oils can cause rashes if used on the skin, according to the National Poison Control Center, and some can be poisonous if they are absorbed through the skin or swallowed. And of course, kids can be allergic to just about anything, and that includes essential oils. Because essential oils generally are not regulated, the best thing you can do if you want to try this remedy with your kids is dilute it first (so a few drops in a bath full of water is probably OK), and maybe try to test the effects of it before putting kids into a steaming room where the oils are distributed in a concentrated space into the air they breathe. Speaking with their pediatrician first is never a bad idea, either.

As of Tuesday, Whedbee's post has been shared 19,000 times, so clearly, her "life hack" is resonating for a lot of people on Facebook. No one in the comments on the post has said they've tried the remedy themselves yet, though a few said they might give it a shot in the future. One person in particular who commented said to Whedbee that they "love that you use natural products , you are such a wonderful mommy."

WebMD offers a few ways to ease a baby's stuffy nose, but none of them involve the method that Whedbee tried out, to apparent great success if that photo is anything to go by. The site suggested putting saline (saltwater) drops in a baby's nose, placing a cool-mist vaporizer or humidifier in a baby's room, and reported that "gentle taps on your baby's back can help ease chest congestion."

Parents have been dealing with babies and kids with stuffy noses since the beginning of time. But this may be the first time that an all-natural remedy has gone viral the way Whedbee's "snotpocalypse" method did. As much as it looks like it worked, I don't need to see any more "after" photos showing the results of this remedy if other parents try it out, thank you very much.