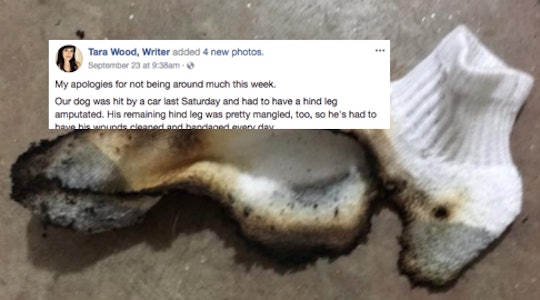 When writer Tara Wood posted on Facebook about her crazy morning as a mom — that included such gems as dealing with an injured pet and the baffling challenge of retrieving her son’s inflamed sock before it burned the house down — she likely didn’t know how viral it would go. Wood's slightly sad but also hilarious post about her rough morning is likely to make your entire day — maybe even your week. And it's only Tuesday.

Wood started the post by saying, "My apologies for not being around much this week," implying that her readers and fans are used to the posts on her Facebook page being a little more frequent (and, indeed, it looks like she shares something there at least every few days). But, as it turned out, she had a very good reason for the lack of updates: her family's dog was hit by a car in the days prior to the "rough morning" post, and had to have its hind leg amputated. Poor pup.

That, in turn, led to challenge number one on this particular morning in question: the critter needs to have his wounds cleaned and bandaged each day, according to Wood, and that understandably creates some stress for herself and for the dog. But things seemed to be sort of looking up; Wood said she got a sign on Friday that let her know "things were pretty much back to our abnormal normal around here."

As one of her family members was leaving for school that day, she turned and said something that every parent dreads hearing: "I smell something burning." This led to Wood frantically searching her house for the source of the "plastic melting" smell, waking and alerting other family members as the smell got stronger.

Sounds pretty scary, right? No worries, this part of the story has a happy ending. Eventually, Wood found the source of the smell: a sock had somehow found its way onto the bulb of the ceiling light fixture in their game room, where her son, Leo, was blissfully playing the Wii and paying no attention to the smoke filling the room. I'm guessing there are some parents out there who can relate to that typical kid behavior.

Wood managed to get the sock off the "light fixture of potential death," as she dubbed it, by standing on a chair and using her toddler daughter’s doll "which now has a disfigured, melty head" to knock the sock down, so that crisis was averted. But her son remained totally unfazed, according to The Huffington Post. His only comment? "'Sock Fire' would be a cool band name."

But that's not all! After that incident, Wood then also had to deal with her daughter's discovery of a squirrel outside — a dead squirrel. That the little girl was super pumped to be holding, for the record, as she was not actually aware that the unlucky critter was, in fact, deceased. Yikes.

Believing the squirrel to be asleep, not dead, Wood's daughter put the body in her shirt to keep it warm — a tidbit Wood shared that is sure to make any parent wince. So how did Wood manage to convince her little girl to give her the "sleeping" squirrel? With food, of course. According to Wood's post, she told her daughter:

If you let me hold the squirrel, you can have a bowl of Doritos. A big bowl! And a fudge pop!

Which seems like a pretty legit bribe to me, to be fair.

Wood then got rid of the squirrel, gave her daughter "a quick bleach scrub down" and the aforementioned promised treats, then went about her day, like many parents who deal with a number of crises before noon.

So if you think you've had a rough morning, ask yourself: did you deal with an injured dog, a sock fire, and have to negotiate with a toddler for a dead squirrel today? If not, maybe count your blessings. And remember, as Wood wrote, "shit can always be weirder so just, like, roll with it," which is probably good advice for just about anything in life, but it's especially relevant to anyone who's ever had the weirdest day ever thanks to parenthood.