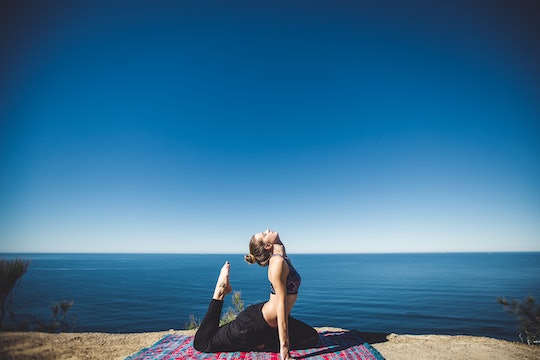 This Mom's Viral Post About Farting In Yoga Is Hilarious

After Australian blogger and mom-of-two Laura Mazza gave birth to her second child, she — like many women — struggled with some lingering post-pregnancy abdominal muscle separation. On the advice of a physiotherapist, Mazza decided to try a yoga class in hopes of improving her condition, and while that likely seemed like a pretty harmless and worthwhile suggestion at the time, it sounds like she may have come to regret it for one particularly hilarious reason. This mom's viral post about farting in yoga may have been a totally embarrassing nightmare, but Facebook users are clearly loving Mazza's LOL-inducing, relatable recounting of a struggle that's been shared more than 9,000 times since it was first posted Wednesday.

According to Us Weekly, Mazza explained that while she was more or less game to give yoga a go at first, it didn't actually take long for the situation to start going downhill. Mazza wrote that when she arrived at the darkened, candle-lit studio filled "with slender women with their nice tight yoga pants," she realized that the class would actually be "real yoga, not like 5, 6, 7, 8 and stretccchh..." That was roughly also the point when Mazza began to regret her quickie grooming routine (but really, who has time for proper shaving when you've got a baby and a toddler anyway?). She wrote,

I'm there hiding in the corner thinking 'please for the love of god do not notice me.' Everyone's taking off their socks and I'm thinking oh lord, my toes are hairy and I didn't shave them, I only dry shaved my ankles in case my pants ride up.

But it turns out that hairy toes and "'80s flare" yoga pants would soon be the least of Mazza's worries. After admitting that she'd "had IBS symptoms like something crazy" over the past few weeks, and that her "farts stink like something mixed between a rotten egg and an incineration plant," Mazza wrote that "somewhere between the dolphin position and the three legged dog, two of those burning garbage eggs [slipped] out."

Because Mazza is basically all of us, her first instinct was, naturally, to have a massive internal freak out. And her reaction was so relatable:

I'm thinking, do I leave? Do I leave the country? Is this happening?? IS THIS HAPPENING TO ME? Not only do I look like a slob but now I stink too.

But, total champ that she is, Mazza managed to soldier on, reminding herself that, hey, she's human, and sometimes humans fart during yoga.

Unfortunately though, Mazza's body wasn't quite done betraying her in the most mortifying of ways. She explained that not long after, the instructor began coming around to offer hands-on adjustments, which should have been awesome and helpful. But while Mazza wrote that she preemptively "[held] in [her] butthole nice and tight to make sure no farts [escaped]," it clearly wasn't enough to do the trick:

She comes over... pushes my back down...

The loudest trumpet comes out of my ass.

I froze and thought oh my god. Oh my god.

At that point, Mazza opted to cut her losses and hightail it out of there. But not before what is possibly the most hilariously embarrassing yoga class exit of all time:

I turn around just as I'm closing the door And look up embarrassed to see everyone on their knees wide eyed staring at me in shock... (or in an awake coma from the smell)

And guru ashram yoga teacher looks at me, bows her head and joins her hands together and says 'namaste.'

And I think nah I'm a go, and I run out the door and now I'm sitting at McDonald's eating a sundae crying and laughing.

Unsurprisingly, Mazza's post has earned her thousands of comments from internet strangers who wrote that her hilarious story made them laugh so hard they cried. Others on the other hand, wrote to share their own farting-during-yoga horror stories, leading to a pretty entertaining show of embarrassing-moment solidarity.

This isn't actually the first time though that Mazza has endeared herself to countless others on social media for her honesty. According to The Daily Mail, in November, the Melbourne-based mama shared a post owning up to what she called her "sh***y mum confessions," highlighting the fact that, even though we may not admit it, we all have our less-than-perfect mom moments at times (and that they aren't anything to feel ashamed of).

Some of Mazza's best mom confessions? She wrote that sometimes she and the kids will stay in their pajamas all day long, but she'll lie and tell her husband that they just changed into them prior to him arriving home. She also admitted that she'll sometimes put off changing her baby's diaper if it's close to the time her husband's due to arrive home so she can make him do it instead. Mazza wrote, "If I can smell poo after 4pm, I save it for my husband."

She also shared that some days she lets her son "eat toast three times a day because he doesn't want anything else," (we've all done that, right?), and that she tries to get both her kids to nap at the same time so that she "can watch [Real Housewives] shows or house reno shows," (Genius).

Let's be honest, even if it's totally natural, farting during yoga is mega embarrassing, and Mazza's experience is likely many people's ultimate nightmare. But by sharing her story — along with all the other honest posts she shares about parenting — Mazza is reminding all of us that embarrassing moments happen. And sometimes all you can really do about it is laugh.

More Like This
The “Tripledemic” Is Scary, But I Feel Less Helpless When I Wear A Mask
Festive Mommy & Me Holiday Nail Ideas To Try
101 Advent Calendar Activities, From Books To Read To Cookies To Bake
The Best Black Friday 2022 Deals For Moms