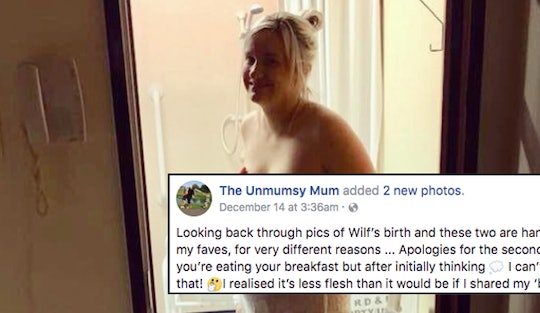 Postpartum body image issues are something that many moms struggle with. A woman's body undergoes a myriad of changes during and after pregnancy and it can take a while for the mind to catch up. In a time when the web is flooded with celebrity moms looking painfully perfect immediately after childbirth, this photo of a mom in a diaper right after giving birth is so empowering and it will make you feel even prouder of your own postpartum body.

The pain and anxiety surrounding the unveiling of a postpartum body weighs heavily on the minds of many new moms. Emotions are often torn between celebrating the new life that you brought into the world and mourning the old body that you left behind. This inner turmoil is the very reason that Sarah Turner was willing to bear it all online.

Turner is the voice behind the popular Facebook page The Unmumsy Mum and she recently gave birth to her son Wilfe. She posted two very different photos that were taken after the birth, and both are beautiful in their own way. The first photo shows mommy and baby in a sweet embrace, just after the water birth. As for the second photo, well, I'll let Turner explain it for you via her Facebook post:

Apologies for the second photo if you’re eating your breakfast but after initially thinking I can’t share that! I realized it’s less flesh than it would be if I shared my "bikini body"and represents the postpartum reality so well.

She goes on to explain how she was feeling at the time that the second photo was taken. According to her Facebook post, she wrote:

I was absolutely euphoric at this point, despite walking like John Wayne and wearing an adult nappy. I cannot tell you how much we were laughing by this stage either, mostly at how lucky James is.

Turner's candidness and obvious acceptance of her body struck a chord with many of her followers. Many of the comments on the post came from other moms who related to her experience. One such mom wrote, "Ahh god that pic of you in the nappy brings it back! Haha totally remember that feeling of my first walk to the bathroom after the epidural wore off and my jelly belly swinging weirdest feeling ever!!!"

Turner responded to this mom, explaining that bodies should be sources of pride, regardless of how "attractive" society says it is. "I know it’s not the *most* attractive photo. But I felt like Superwoman at that point and so I am proud of it. Our bodies are pretty amazing," Turner wrote.

Dr. Jessica Zucker, a clinical psychologist who specializes in women's reproductive and maternal mental health, wrote a blog post for HuffPost offering advice for moms who are concerned about the way their bodies look after having a baby. One of her four recommendations is to aim for body acceptance. According to her HuffPost piece, she explained that trying to fight the changes does more harm that good:

The more we resist the plethora of alterations that happen to our bodies during pregnancy, the more difficulty we might have embracing the actual experience of creating and sustaining life. Acceptance can be a tall order in the midst of body fret, self-loathing or anxiety that your body will be forever enlarged or tattooed by stretch marks.

Reaching a place of love and acceptance can be a difficult process for moms adjusting to a whole new life with their little one. Photos of celeb moms with professionally trained and toned bodies just weeks or months after giving birth can be discouraging. But honest posts like Turner's show how common of an experience postpartum body changes are.