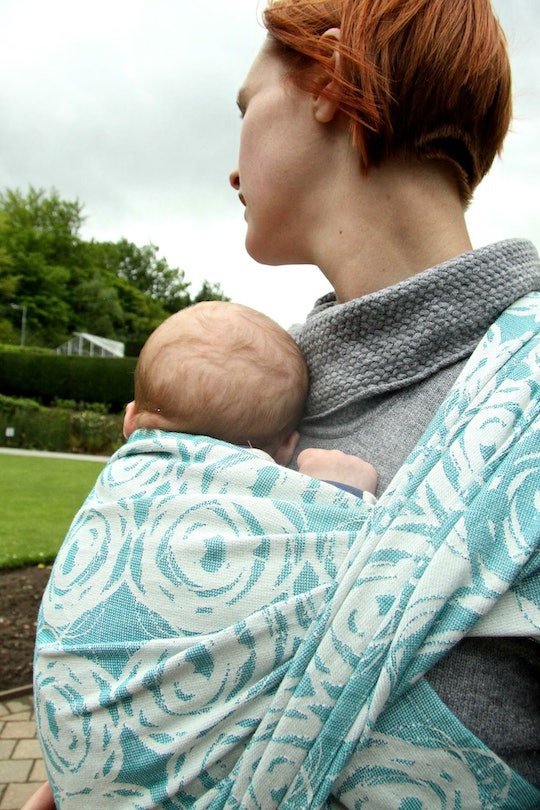 Most parents can recall that feeling, during the first weeks of a child's life, when it seems impossible to get anything done because the baby requires constant care. The baby won't sleep anywhere but your arms, but you've still got things to do. Baby wraps and carriers may seem like the perfect solution, because you can hold your infant close while still having both hands free. But there are some situations in which it's best to leave the baby behind, and one mom’s injury shows that babywearing while cooking, though it may seem convenient, is actually quite dangerous.

New mom Molly Landis shared a photo on Facebook that's quickly going viral. In the caption, she explains that she often wore her four-week-old daughter in a wrap carrier on her chest while cooking, but last Tuesday night, the baby happened to fall asleep in her swing. While Landis was cooking, an explosion on her stove "sent a fire ball to my face, neck and chest," causing serious burns. "Yes, this is horrible and painful but I haven't been able to stop thinking about how lucky I truly am," she wrote. Landis revealed that the most severe injury was to her chest, in the exact spot where her daughter's head would have been resting, had she been in her carrier.

The point of my message is to pleaseeeee be cautious of the activities we do while wearing our babies! Since this happened I have had so many moms say "omg, I do that all the time" .. we never think it could happen to us and I never thought it would happen to me. So grateful she wasn't near the explosion.

For many parents, cooking is a mundane daily activity they've been doing for ages, so it's easy to be lulled into a false sense of security. It's easy to forget that even if a baby is too young to actually reach for a knife or a hot pan, they can still be in danger. A loose scrap of fabric could catch fire, hot grease could splatter, or, as in Landis' case, an unforeseen accident could occur. But even so, a small, informal poll in one parenting forum found that more than 80 percent of moms wear their babies while cooking, even though most agreed that it was risky.

There's no perfect way to parent, and certainly nobody could have predicted a random kitchen explosion, but there's a reason that "it's better to be safe than sorry" is such a popular cliché. A four week old infant left alone in a swing or crib for a few minutes may cry. They may seem completely miserable. But those cries won't last, and they won't be scarred for life. The same can't be said of burns. And if there's a legitimate medical reason why your baby needs to be held constantly, I give you permission to order a pizza, microwave ready-to-eat soup, or have granola bars for dinner. Nobody expects a new mom to be able to do it all (or at least, they shouldn't). And if you don't have an infant, but you know someone who does, bring them a hot meal, and hold the baby while they eat it! It'll help more than you know.