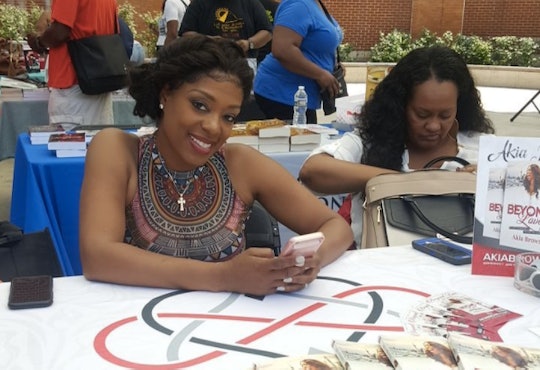 The one downside to private institutions is that they can make whatever rules they want. For example, outside of Atlanta, a private school denied admission to kids because of their mom's open marriage. It all went down after Akia Brown self-published a memoir called Beyond Love — which is about her marriage with her husband and what she calls "wife-in-laws" — last winter.

In July, Mount Paran Christian School in Kennesaw, Georgia reportedly called her home and told her that her daughter, who attended the school for two years, would not be allowed to return. They added that her son, who was supposed to start pre-kindergarten this fall would reportedly be denied admission because of her open marriage. Romper's request for comment from Mount Paran was not immediately returned.

Mount Paran is a private Christian day school and parents sign a "covenant agreement" when they enroll their children, pledging to live by the Bible, according to the school's website. The policy says:

The applicant and his/her parents must express a belief of biblical teachings, and a willingness to follow them, as well as student and parent’s affirmation of faith. Parents and students must read and agree to support the Statement of Faith ... commit to uphold Christian principles in their daily lives, and actively participate in a local church body. As a covenant Christian school, MPCS reserves the right to determine whether Mount Paran Christian School is an appropriate placement for the applicant and/or the family. MPCS reserves the right to deny acceptance, terminate, or suspend enrollment of students at the school’s discretion with non-disclosure of reasons.

Although the policy states that the school doesn't have to give an explanation, according to The Atlanta Journal Constitution, Brown alleged that the administrator who called her said that her children would be denied admission for the school year because of her open relationship.

She was able to place her children in another school, but her daughter, a first-grader, she says, is missing her friends. Brown told MyAJC that the administrators didn't even give her a chance to fight for her children. "They haven’t even read the book. I don’t know how they even found out about the book," she told the local news outlet. Brown added:

Yes, (the book) discusses open marriage — or what others may consider an open marriage — but the real meaning and everything I have ever talked about is unconditional love and having a forgiving heart.

Brown's husband, Brian Maurice Brown, was reportedly incarcerated for 10 years on drug charges, according to MyAJC. In 2012, he started BMB Records, the label that Carlie Baltimore and Ray J. are signed to. In the book, Brown details how over the years, her relationship with her husband evolved into an open marriage, in which her husband has other woman. Brown calls them her "wife-in-laws."

Although her book as also been called "salacious," she says that it's really about finding a love that works for her and her husband. And in the case of open marriage, advice columnist Dan Savage calls this type of relationship "monogamish," according to The New York Times.

He believes that although monogamy works for some people, for others it's just not the way to go. If anything, at least, the public discourse about marriage usually misses the mark. He might be right. Some studies show that human beings aren't wired to have only one partner.

I acknowledge the advantages of monogamy. When it comes to sexual safety, infections, emotional safety, paternity assurances. But people in monogamous relationships have to be willing to meet me a quarter of the way and acknowledge the drawbacks of monogamy around boredom, despair, lack of variety, sexual death and being taken for granted.

In theory, an open marriage prevents cheating or being dishonest with a partner. In most cases, they involve a lot of communication between partners as they work to meet each others' sexual and emotional needs. An open marriage isn't about "letting someone cheat," it's about loving someone enough ensure their happiness, as they do yours.

Open marriages aren't for everyone, though it hardly seems like a school's place to punish children for their parents' relationship status. Hopefully the Brown children are loving their new school and their whole family will feel accepted.