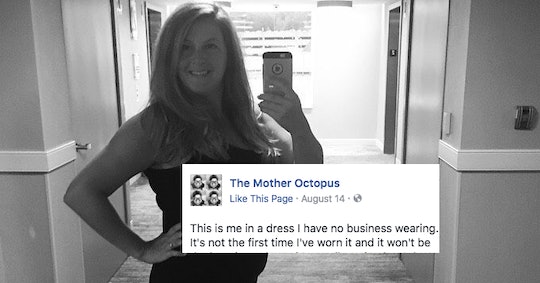 This Mom Perfectly Shut Down Society's Beauty Standards With This Selfie

Katey Johnson is a 40-year-old mother and blogger who recently showed the world just how important it is to love the skin that you're in. After convincing herself that she "had no business" wearing a tight dress, she proved her toughest critic wrong. And as a result, this mom's selfie of her wearing a little black dress went viral for such an important reason. Not only does Johnson look absolutely fabulous in the shot, but her message is so important and it's all about self love.

Along with raising her two children in Long Island, Johnson runs the blog The Mother Octopus and its accompanying Facebook page. It was to this page that she posted a black and white photo from a trip with her husband that has since gone viral. In the photo, Johnson is wearing a sleek LBD, but, it's the beautiful body-positive message that captioned the photo that has gained it so much notoriety:

Johnson spoke with Romper about her rationale behind sharing the photo with the world, as well as the courage that it took to do so:

I chose to share this piece because it really was a milestone for me. I've struggled with my weight for as long as I can remember. I don't know if turning 40 in May had something to do with it, but even though I knew that I could look better in the dress, I didn't care. When I tried it on, I loved it. It felt great. I was going to wear it and that was that.

The photo was, for her, a way of conquering the inner critic that haunts us all. "I feel like if I could get over my own insecurities and wear the dress, anyone can. It was an amazing feeling," Johnson said. With the current culture of mom-shaming and pressure to "bounce back" after babies, it is refreshing to see a mom open up about her struggles and share her successes.

Despite her own fear, the public's response to Johnson's candid post has been overwhelmingly positive:

The feedback has been amazing! And thank God cause it was a struggle for me to post that picture. It's one thing to wear the dress, but it's another thing to put it out there for the world to judge.

Johnson said that she believes that the post has been so successful because of how common a struggle it is to accept one's appearance:

Ultimately, I think everyone struggles with body positivity. Regardless of sex or age, people are vulnerable to the way others perceive them and the way they look, so I think the post is easy to relate to.

Considering that the post has gotten more than 17,000 likes and over 4,000 shares on Facebook, it's safe to say that her message has hit home with quite a few people. And her bravery and willingness to tackle such an important issue makes Johnson a hero of body positivity in the eyes of many.