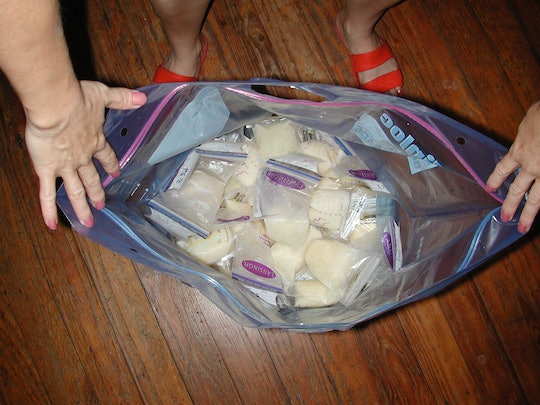 Airports are always a pain to get through, especially if you've ever had something confiscated at security. Usually though, the items in question are something you forgot were in your bag or didn't meet specifications. That's fair. Sometimes though, it's your breastmilk, which is not fair. Which is why this mom's letter about dumping her breast milk at the airport is so frustrating. It's because on every level, every step of the way, it doesn't make any sense as to why she had to dump the whole stash. Jessica Coakley Martinez wrote an open letter to Heathrow Airport on Facebook explaining her experience and it's since gone viral.

Martinez had been traveling for work for over two weeks and to stick to her eight month old's feeding schedule, had pumped every chance she could get while on the road to bring back her milk. "This meant pumping while sitting on toilets in public restrooms, stuffed in an airplane bathroom," she wrote. And to further drive the point home, she continues that she pumped in places more familiar to working moms. She pumped, "in unsecured conference rooms, showers, and closets because certain office spaces didn’t have a place for a nursing mother," like many are forced to on a regular basis.

She convinced hotels to freeze the milk in their restaurant freezers and "lugged" it through various airports, where she was allowed to bring the frozen milk with her. Already, it's unfair that a mother wouldn't have comfortable or safe places to nurse and count on airport security to sympathize, but it gets even worse.

According to their rules, which Martinez admits she didn't read, the Aviation Security doesn't allow nursing mothers bring milk on the plane unless they are with their baby. So they dumped the liquid milk, which was fine with Martinez, but she planned on keeping the frozen block with her. Which makes sense, since it's not, by any scientific standards, a liquid. But because it could melt, the officials wouldn't let her take it. They also wouldn't allow her to exit the airport and re-check her bags. So they dumped over two weeks of food for her baby.

Martinez's story is not uncommon. The TSA in the U.S., for example, is being asked by a coalition of Congresswomen and mothers to "follow its own rules" and consistently let mothers carry breast milk or other liquids in excess of the 3-1-1 rule, ice packs included. In fact, as long as you inform the agent and separate the liquids, you're good to go, no matter the size of your carry-on. But there are stories all the time about agents unjustly dumping liquids, even though mothers are in compliance with the rules. Sometimes, like Martinez did along her travels, women can run into empathetic guards who let them pass without a hassle. Sometimes not so much.

According to Vice, although the TSA allows unlimited milk and ice packs, there is a provision that allows the agents to use "random and unpredictable security measures," at their discretion. "Random" and "unpredictable" are two words that should never be used when talking about feeding a tiny human. Unfortunately, though, it's entirely within their job description to toss your possibly slushy ice pack and milk be tested if they see a need to do so. Of course, airport security is an essential component to international security and safety. But the inconsistencies in the treatment of breast milk are unnecessary and unfair at best. At worst they can lead to embarrassing confrontations at the airport for the nursing mother and leave them without food for the baby. That's not OK on so many levels.

In Martinez' case, she was reduced to discussing the properties of water with a security agent who, according the mother, had a colleague who seemed confused by the whole affair, suggesting that sometimes, exceptions are made. Security officials need to be educated and trained to be more sensitive to a nursing mothers' needs. It's not a bottle Cuban rum mothers are trying to sneak through the gate. It's food for a baby, and also really hard to procure.

Like other "female" things, it's safe to assume that if men had to nurse in storage closets at their work conference or make an Applebee's waitress stash their milk behind the bar for them while they finished with a lunch meeting, frozen and liquid breastmilk would just be flying through those X-Ray machines and tampons would be free. Alas, that is not the case.

Until then, though, the most women can do is know their rights. You are allowed to have lots of breast milk on you and they are allowed to test it. There should be no dumping, unless you really are carrying some chemicals in a bottle, in which case, you should be arrested. But for everyone else? Inform the agent before you go through, have the liquids separated, and make sure those ice packs aren't slushy by the time you get to security line. Then, just cross your fingers the agent is a mom, too. It's infuriating, but sometimes that's your best bet.