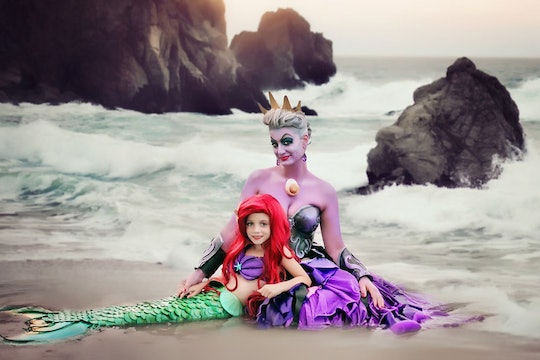 Camillia Courts and her 7-year-old daughter Layla have been taking Disney princess themed photos that are every little girl's dream come true. Courts is a professional photographer, and her talent and experience shows. This mom's magical Instagram photos with her daughter will blow your mind.

With their fantastic photos, the two Courts ladies have become princesses in their own right. Every month the two of them feature a new princess on their site. Their fame has grown viral as they have been featured on the Huffington Post, BuzzFeed, Cosmopolitan, Daily Mail UK, and more. It is easy to see why the world is so captivated by their photos.

Courts and her daughter come from British Columbia, Canada. According to Daily Mail, they started the princess-themed photos in 2014 after the family took a trip to Disneyland. The photo that started it all was intended to be a one time thing. Courts told Daily Mail that she purchased a princess dress from a gift shop in the park and wanted to get a good photo of Layla in it before she "ruined" it with a day of fun.

Like any proud mom, she posted the photo of her daughter on Facebook. The number of positive reactions to the post — from friends, family members, and clients from her photography business — inspired her to plan another princess shoot shortly thereafter.

She tells Romper a bit about the journey that led her and Layla to where they are now:

I happened to have a Princess Anna Halloween costume and we did another session with Layla dressed as Anna, and this time I added a Caribou to the photo with Photoshop. Both photos were so popular I had a ton of requests to do other characters and from there we started small.

Things have certainly taken off from there. Comments singing her praises are still pouring in for new posts as well. She now has more than 50,000 followers and has been featured on sites around the world. One Instagram user commented:

Love all these pictures Layla!! The Frozen Fever shoot and the Hermione ones are my favourite! I hope that you continue to rock all these looks because it adds magic to everyone's days ✨

Courts tells Romper that she and her daughter prefer to portray different types of Disney characters:

Every month I photograph my daughter as a different Disney princess and I like to dress up as the villains!

She also dished on her love for the evil Disney characters to HuffPost earlier this year:

Every once in a while I like to get in on the fun, and I think being the villain is way more fun than wearing the crown. I have a fantastic makeup artist named Missy MacKintosh who has transformed me into Maleficent [from Sleeping Beauty], The Evil Queen [from Snow White] and my favorite, Ursula [from The Little Mermaid].

While she makes a very fetching Ursula to Layla's Ariel, no one would accuse Courts of being evil after seeing these beautiful photos. The love this mama has for her daughter shines out through her camera.

No detail is spared in recreating the magical scenes. One scene in particular, modeled after Disney's The Little Mermaid, took months to create. Courts did admit to Daily Mail, however, that she was a little jealous of Layla for getting to wear the mermaid's fin and flowing red hair.

The experience has done more for the two than just increase their social media following. Courts's daughter, in particular, has benefitted greatly from the sessions. She tells Romper:

Layla is a very shy and reserved child, and she has really blossomed and come out of her shell through this project. She loves to dress up and she loves when we dress up together. Because this project is just for us, it's a really fun way to spend time together, be silly, and have some really unique and fun memories to look back on.

I, for one, hope that there is no end in sight for these gorgeous photos. I think I just found my new favorite Instagram page.