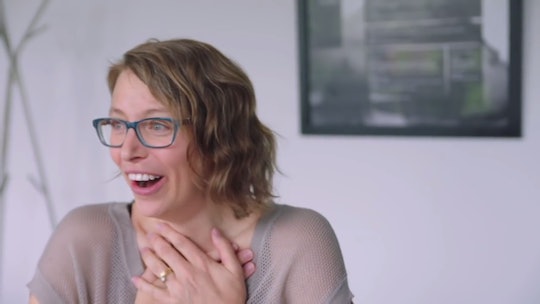 Many mothers feel (thanks to the way society treats moms who have a life and a job) "working mom guilt" about not being able to be there for their baby at every moment. In a campaign to validate and celebrate mothers, Chicco, a global maker of baby products, released a video that shows the heartwarming feedback a new mom received from her family and co-workers during a performance review at work. This mom’s performance review after returning from maternity leave will make you smile.

The video features a real-life mom sitting down with her boss. The mom, Jessica O'Dowd, tells her boss she has some doubts about her performance upon returning to work after having a baby.

"I certainly feel spread thin," she says in the video.

When asked by her boss how being away may affect her performance at work, O'Dowd admits that "it's scary" because she wasn't sure she could perform at the same level.

O'Dowd's fears certainly resonate with many new mothers, who must find a balance between work and motherhood. In a study from Pew Research Center, while 58 percent of moms say they spend the right amount of time with their children, almost 40 percent believe they don't spend enough time with their kids.

O'Dowd is then shown a video of her co-workers, friends and family, who give feedback on how she's handling work after becoming a mother. And it turns out, like many moms, O'Dowd is her own harshest critic.

"I have no idea how you're achieving so much in the same amount of hours I have in the day," Aaron, O'Dowd's coworker, said.

"She puts 100 percent in at work, and then when it's time for her family and her baby, she's 100 percent with them," O'Dowd's mentor says in the video.

The most emotional part of the video is when O'Dowd hears her sister Nicky's thoughts about how hard she is working to be a good mother.

"You are an amazing mother, wife, sister, daughter, and I aspire to be just like you," Nicky says.

The video is part of the #neverstopgrowing campaign from Chicco, which celebrates new moms everywhere who are balancing their own expectations about motherhood with the realities of becoming a mom.

In a press release, Brenda Liistro, General Manager of Feeding & Care for Chicco, wrote about the struggle new mom's deal with to be the best at work and in motherhood.

In our research with new and expectant moms, we saw the emotional tug of war when motherhood begins: Mom is performing many new roles, but she doesn't believe she is performing any role as well as she would like...That is simply not the case. At Chicco, we're dedicated to giving Mom the empowerment and flexibility she needs to be a parent, a spouse, a sister, a friend, a colleague – however she defines her life. We are proud to stand with new moms to celebrate their accomplishments and remind them of all the support surrounding them and their baby.

The campaign's heartwarming message is important: mothers should hear that they are doing a great job, especially when they face as much shaming and inequality as they do in the U.S. That message becomes key at the end of the video, when O'Dowd realizes tough she's been on herself:

For all the working moms who beat themselves up about not being perfect at everything, hopefully this video will let you know: you're crushing it.