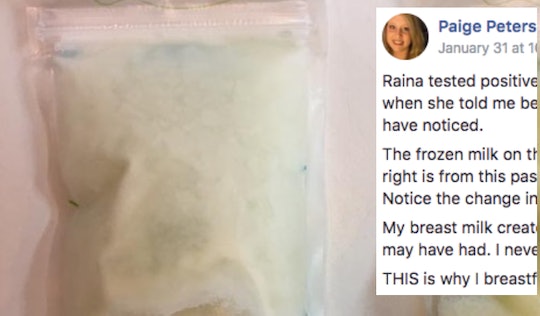 Breast milk is often hailed as liquid gold and that nickname is hard to argue when you consider all of the qualities that it boasts. It provides a number of health benefits for both mom and baby. And this mom's photo of her breast milk before and after her baby got the flu shows how breast milk is made to meet the specific needs of the baby that it feeds, proving yet again that the stuff really is magical.

Paige Peterson posted a side-by-side photo on Facebook of two bags of her breast milk, one that was pumped two weeks earlier and another pumped more recently when her daughter came down with the flu. The first bag was off-white in color, while the second was yellow. Peterson explained in her post, which has gained more than 39,000 reactions and 41,000 shares on Facebook, that the change was due to her daughter's illness:

Raina tested positive for flu this past weekend. I didn't believe the nurse when she told me because she hasn't had any symptoms of flu that I have noticed ... My breast milk created antibodies to fight off any infections that Raina may have had. I never gave her Tamiflu.

Human breast milk does a lot to nourish and strengthen babies. Breast milk comes jam-packed with antibodies, immune factors, enzymes, and white blood cells to protect babies from any germs that he or she comes into contact with, according to Heathy Kids.

Not only does breast milk change to combat an illness that your baby has, it also protects him or her from illnesses that you have. "If you develop a cold while breastfeeding, for example, you are likely to pass the cold germs on to your baby — but the antibodies your body produces to fight that cold also will be passed on through your milk," Healthy Kids explained.

There's a reason for the difference in color that Peterson's post shows as well. Certified lactation consultant Rachel Miller explained to local news station WCNC that it could be due to a change in calories. "Sometimes when we are sick our body is burning extra calories as we’re fighting off that illness, so it could very well increase the calories of mom's milk to make sure the baby has the energy to be doing the work of fighting off the virus," she told WCNC.

But increased calories aren't the only explanation for the change in color. Jamil Abdur-Rahman, M.D., board-certified OB-GYN and Chairman of Obstetrics and Gynecology at Vista East Medical Center in Waukegan, Illinois, told SELF in February 2016 that it could also be an increase in leukocytes, the infection-fighting white blood cells that make up colostrum. "... Whenever any fluid from the body contains a large amount of infection-fighting white blood cells or antibodies, it will assume a yellowish color that is very similar to what many people would call 'pus," Abdur-Rahman told the publication.

Peterson tells Romper that she initially struggled with her decision to breastfeed and had a rough go of it in the beginning. However, her recent experience with her changing milk reinforced her belief that it was the right choice for her and her family.

"Breastfeeding gives her the best nutrition possible, and allows me to bond with my daughter in a way that nobody else can," Peterson tells Romper. "When my daughter tested positive for the flu at four months old, but showed no symptoms, it confirmed all of my reasons for choosing to breastfeed." And while she would not tell another woman how to feed her child, she said, "I hope more moms consider breastfeeding because it’s an amazing experience."

Breastfeeding doesn't work out for everyone, but stories like these show just how amazing of a process it is and our incredible women's bodies are.