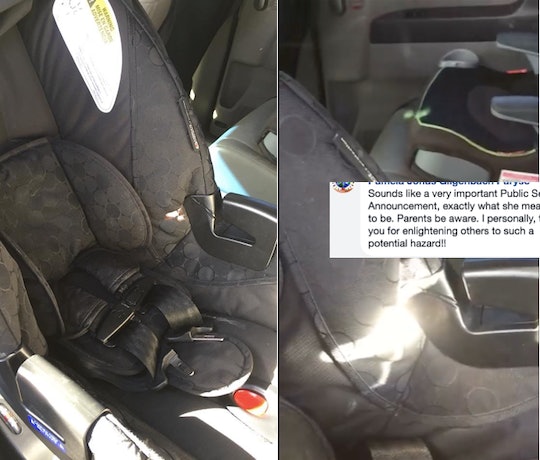 We all want to keep our children as safe as possible while driving, and if you have an infant, that means placing them in a rear-facing car seat. The only problem with that setup? You can't actually see them while you drive, which can sometimes be a bit nerve-wracking. As a result, many parents opt to install car seat mirrors that allow them to easily keep an eye on their children, but this mom's post about her kid's car seat smoking is a reminder that parents have to be vigilant — even harmless-seeming car seat accessories can pose a threat to babies if we aren't paying attention.

In a Facebook post that has since gone viral, Texas mom Amanda Kenny DeAngelis wrote that she was driving home with her baby daughter, Mila, and when she went to take her out of her rear-facing car seat, she could smell smoke. It was then that she realized that the reflection of the sun off of the car seat mirror she'd installed was actually burning the car seat fabric. The shocked mom wrote that she'd used car seat mirrors before with her older children and never had any issues, and, like many parents, she had never really considered that something like a car seat mirror could actually be a fire risk.

DeAngelis reported the incident to Britax, the manufacturer of her daughter's car seat, and wrote that the company quickly got back to her (though she didn't specify what there response had been). In a statement to Redbook magazine however, Britax noted that "Direct sunlight reflecting off shiny objects in a car can be dangerous," but that DeAngelis' smoking car seat actually illustrated the importance of federal laws requiring car seats to meet flame retardant standards (that is, the situation probably would have been much worse had the car seat not been flame retardant). Britax's overall recommendation? That "parents and caregivers exercise caution when using any after-market car seat accessories, including back seat mirrors," and, well, it's pretty good advice. After all, even with safety measures in place, accidents can totally happen. (Britax did not immediately respond to Romper's request for comment.)

In Matthews, North Carolina, however, DeAngelis' video actually prompted the police department to issue a warning to parents, according to ABC 13 News. As Matthews Police Department spokesperson Tim Aycock noted, in addition to the risk involved with the mirror's reflective surface, the fact that car seat mirrors are an after-market product that can't be permanently attached to the car itself means there's also a risk of them coming loose during a crash. In other words? Parents might want to think twice before installing any additional accessories into their cars, car seat mirrors included.

Of course, the relative risk of car seat mirror-related fires is low, as is the danger of the mirror injuring your child during a crash. But the point, as DeAngelis noted, is that parents at least need to be aware that these risks exist. And while some of the comments left on her video criticized DeAngelis for not knowing that a backseat mirror could be a fire risk, the reality is that for many parents (myself included), it's not usually something that makes the radar the way that, say, ensuring the correct positioning of the car seat straps does. And then, there's the other "this probably should be obvious but it isn't always" concern: the mirror itself can be a distraction to the driver, which, while it might not be a huge threat, it still something that should be taken into account.

The takeaway from this? Car seat accessories aren't entirely risk-free, and parents should weigh the pros and cons when deciding whether to use them. For some, being able to see their rear-facing infants may still outweigh the potential dangers, and for others, it's just not worth taking a chance. But regardless of anyone's opinion on car seat mirrors, the video is a valuable reminder that potential hazards really can be anywhere — especially with children — and that parents need to at least be aware in order to keep their kids as safe as possible.