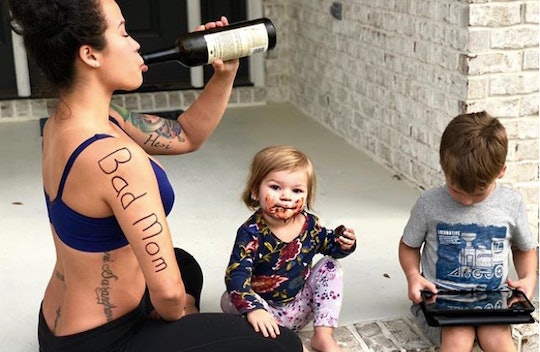 This Mom Fired Back At People Who Call Her A “Bad Mom,” & Her Post Is Going Viral

What is it about parenting that makes people feel justified in judging and critiquing the actions of perfect strangers? Mom-shaming is painfully prevalent on social media, as many moms know all too well. For anyone questioning themselves after receiving criticism, this mom's post about why she's a "bad mom" is a must read. As she points out, perfection is impossible.

Sia Cooper is a certified personal trainer and mom of two. After endless judgement, she posted a picture to her Instagram that detailed every one of her actions as a mother that has drawn criticism and moms are loving it. She begins by explaining how perfection in motherhood is impossible, given the endless onslaught of judgement that mothers face. From there, she lists all of the things she's done "wrong" in the eyes of her critics.

“I’ve been called a bad mom for workout out during pregnancy, for caring about my looks and health, using canned goods, having tattoos and piercings,” she wrote. Along with these errors, she has also been shamed for drinking wine, letting her kids have sugar and technology, and not “covering up” her body around her little ones. Running a full time business from home, co-sleeping, having a hobby and having abs were apparently cause for shaming as well. Her post is a response to these critics, but also a message for other moms.

She goes on to explain that the real "bad moms" are those who spend their time and energy judging others:

Those moms are the ones who are truly insecure and have strong feelings of inadequacy because why else would they do that? Misery loves company.

Cooper tells Romper that she was motivated to write her post after being shamed one time too many.

"I wrote the post after getting shamed over and over. And last week I made soup and posted the recipe on my page and got flack for using plastic crockpot liners and that was the nail on the coffin. I had enough and decided to fight back against the judgmental mothers out there," she says by Instagram direct message.

These incidents of shaming are unfortunately very common. Marie Claire shared a 2017 survey that reported 80 percent of millennial moms having been shamed by other moms. The prevalence of mom-shaming is a big part of why Cooper decided to pen her post. She tells Romper as much, writing, "Every mom has been judged or shamed at some point or another. I wanted other moms to not feel so bad and to not feel alone when it comes to being picked apart by their parental decisions."

It seems that many of Cooper's followers fall into the category of moms who have been judged. One such user shared her agreement in the comments, pointing out the importance of retaining your identity once you become a mother:

Boy did this speak to me!!!! Why can’t we just be real instead of judging each other. Who cares what I do, don’t do, feed my kids, etc. why should I lose my identity just because I am a mom?

Another explained that shaming is a commonplace part of her life as a mom:

I appreciate you writing this! I feel judged everyday [sic] being a mother too. If we Just keep inspiring those around us I'm sure we can make a little difference empowering woman and the world would be a better place.

It is up to moms to stick together and fight against this kind of judgement and shaming. As Cooper pointed out, perfection is simply not possible. Providing support to other parents is how progress happens, not petty shaming.

More Like This
Julia Fox’s Apartment Tour Is Peak Mom Realness
The Best Dressed Parents At The 2023 Grammy Awards
Adele’s Grammy-Nominated Album Features A Beautiful Song Written For Her Son Angelo
Marie Kondo Gives Up Tidying Post-Kids, Sparking Joy For Moms Everywhere
What Parents Are Talking About — Delivered Straight To Your Inbox