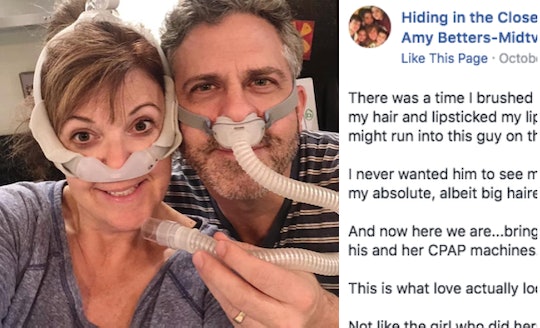 This Mom Perfectly Explained The Reality Of Long-Term Love In This Funny, Heartwarming Post

Anyone who has been with the same person long enough that the honeymoon stage feels like a distant memory will likely agree that it can be easy to romanticize the early days of a relationship. Working, paying bills, doing housework, and raising a family seems to inevitably take even the hottest coupling down to an at-times unenthusiastic simmer, and, let's be honest, even when you try to keep things fresh, the intense familiarity of long-time love can make it difficult to keep the spark alive. But that's why this mom's post about "what love actually looks like" after more than two decades together has so many people cheering. Because as blogger Amy Betters-Midtvedt so perfectly noted in a recent Facebook post, sometimes real, lasting love just looks like two people wearing matching CPAP machines.

Betters-Midtvedt first fell in love with her husband, Todd, when she was only 19 years old, according to Babble, and now, 26 years later, the two share five children together — something Betters-Midtvedt regularly writes about on her blog, Hiding In The Closet With Coffee.

After the couple recently snapped a funny photo of themselves wearing CPAP masks before heading to bed, Betters-Midtvedt told Babble she couldn't help but share the pic with her social media followers. And in doing so, it seems she was also able to share a powerful lesson about love and commitment.

Betters-Midtvedt met her husband while they were both students at the University of Wisconsin, as she shared on her blog, and in her Facebook post, she wrote that, back then, she used to make sure she was always looking perfectly made up just in case she happened to run into him. In those days, he was also "the boy who put his best foot forward with perfect manners, perfect curly hair and so much charm," but these days, their romance has become decidedly much less glamorous.

Betters-Midtvedt wrote in her Facebook post that now, "[love] looks like suffering through long, long, loud nights of your partner snoring ... and mornings where your wife is a giant pile of smeared mascara and grouchy attitude because once again insomnia claimed her nighttime hours."

As grim as that might sound though — especially to anyone living with a snoring partner! — the point, according to Betters-Midtvedt, was that it still somehow feels entirely awesome. She wrote that, after they'd ultimately decided to turn to CPAP to address their sleep issues, they just ended up "laughing [their] heads off," when they saw each other, and still "couldn't wait to jump into bed together."

Better-Midtvedt tells Romper that the moment "was just such a far cry from the early days of [their] relationship [that they] couldn't help but laugh," but that, in the end, it also ended up perfectly encapsulating the beauty of their regular, everyday love. And sharing that message with others felt particularly important.

As Better-Midtvedt tells Romper, "Unrealistic expectations lead to so much unhappiness if we think our lives 'should' be different when in reality what we have right in front of us is just beautiful if we stop to look at all the ways love is expressed that have nothing to do with date nights and flowers."

She continued, "My husband making my coffee every morning and taking a turn with a vomiting kid and staying up until our teenager gets home so I can go to bed are all way more romantic to me than anything else in life."

That's a lesson Better-Midtvedt tells Romper she and her husband try to pass along to their children — that trying to find a life partner really "has nothing to do with showy expressions of love." But it's a message that has also clearly resonated with others online, too. A number of commenters wrote that the post was the perfect example of true love, with one writing, "Best relationship advice I've read in a long time!"

And honestly? Given the fact that the version of love we're so often shown in TV and movies — and in the celebrity relationships many of us look to as #goals — is one of gorgeous-looking romance and glossy perfection, it's also pretty refreshing to hear that we can still be just as happy and in love in the totally unsexy moments, too.

It probably isn't much of a stretch to assume that when Better-Midtvedt and her husband first got married, they weren't exactly dreaming of the day when they'd be strapping on CPAP masks in an attempt to finally get some decent rest. But now that it's arrived, it sounds like just one more aspect of their life they're grateful to share with each other. And that's an outlook that would likely make any relationship feel so much more rewarding.