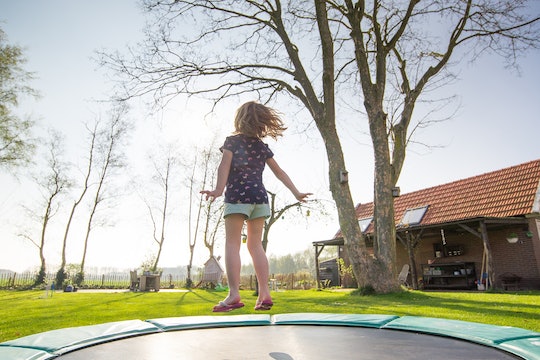 Just because something's marketed toward kids doesn't mean that it's safe for all ages, and sometimes parents are forced to find this out the hard way. Nearly two weeks after visiting a trampoline park, Kait Ellen's 3-year-old son is still suffering, and will continue to suffer for a month longer. His mom’s powerful message about trampoline safety is a must read, especially seeing as it's summer, kids are restless, and families are looking for fun, active ways to spend time together. According to Ellen's message, trampoline's are not the way to go.

Colton, Ellen's son, broke his femur jumping on a trampoline in an indoor trampoline park. The toddler is now in casts, all the way from his waist down to his ankles. This injury led Ellen to do some important research, which she's since graciously shared on Facebook, so that no family has to go through what hers is going through right now. "Colton fell and broke his femur, the strongest bone in his body, while innocently jumping alongside his dad and I," Ellen shared, while also assuring that the adults "were NOT bouncing in the same square as Colton when the injury occurred."

"According to the America Academy of Pediatrics and the America Academy of Orthopedic Surgeons," Ellen learned, "'children under the age of 6 should never use a trampoline,'" even if the kids are just jumping up and down — which is fresh news to plenty of parents. The specific risk, then, isn't attributed to dangerous trampoline tricks, but "is due to the fact that their fragile bones are not meant to withstand the repetitive pressure from jumping." Now, the Ellen family is paying the price, namely through Colton adjusting "to life in a hip spica cast for the next 6 weeks."

In addition to spreading awareness to parents about the dangers of jumping on trampolines, Ellen felt the need to critique that "these facilities are specifically advertising for Toddler Time, when in fact toddlers should be no where near trampolines." Though discretion is up to parents, trampoline facilities do carry responsibility in the programming that they promote, especially when that programming targets an age group that is especially vulnerable to injury in their facilities.

Parenting found that, according to doctors, there's actually "no safe age for a kid to jump on trampolines." Truly, they're just too dangerous for any child, and should be avoided, as Colton's case has unfortunately shown. The afternoon of fun isn't worth the risk of months in two, full-leg casts.