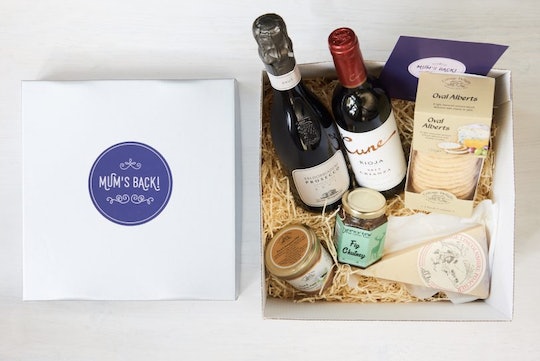 Soft cheeses, alcohol, sushi — the list of foods that are off limits to mamas-to-be is long and tantalizing. Unfortunately, moms are forced to worry about the wellbeing of another over their own desires. So one mom cashed in on her pregnancy cravings by starting a business that sends moms pregnancy craving boxes, which aim to serve moms who aren't feeling like themselves. While enjoying the foods you love is only part of regaining your identity after having a baby, the creator of this company thinks it is an important first step.

Sally Bunkham, a British mom of two from Brighton, U.K., started a venture that provides new moms and moms-to-be with gift boxes full of treats that were forbidden during pregnancy. The boxes range in price from £35 to £96 (roughly $50 to $130) and come in a variety of options. They can either be mailed directly to a new mom or pre-ordered for those who are expecting — expecting moms receive a cute little card letting them know that something special is on its way. Content options include wine, paté, cheese and crackers, chocolate, coffee, gin and tonic, prosecco and energy balls.

Bunkham spoke with Mashable about the company and its inception, saying that she first started thinking about making these craving boxes three years ago when she was pregnant with her first child. All that she wanted at the time was a rare steak and a cold beer and she was sure that other moms out there felt the same way. The idea really started taking shape, though, after her baby shower.

Once her baby arrived, she was struck by how many more gifts the baby received than the new mom herself did. She told Mashable:

I thought to myself: 'What about me? I'm the one who's just gone through pregnancy and am feeling totally lost now ... It would have been nice to have something for me.

Bunkham also said that her hormones were "all over the place" at the time and she felt like she was having an "identity crisis." Many of her friends with babies reportedly felt the same way about themselves postpartum.

The name of her start-up, "Mum’s Back," is loaded with meaning. She told Mashable that she officially started working on the company after being treated for postpartum depression following the birth of her second child. All of this is wrapped up in the meaning behind her company name and the purpose of their products:

It's all about mum getting a bit of her identity back after the physical and emotional roller coaster of pregnancy and childbirth, but it also relates to me getting myself back.

That feeling of loss of identity is all too common to new moms. Many find themselves lost in motherhood and unable to recognize the person that they have become. Caring for a newborn is time consuming and highly demanding. It's hard to squeeze any "me time" in there at all, much less the kind that makes for self discovery. Lisa Knott from the Post and Antenatal Depression Association (PANDA) — an organization to which a portion of Mum's Back's profits are donated — told NewsAU.com that this is a common occurrence:

Our identity is linked to all sorts of things including work and social experiences. During pregnancy and birth you gain a lot, but you absolutely lose a lot as well ... This can absolutely contribute to post or antenatal depression for some parents.

Practicing self-love is one way to combat this sort of loss of self. As Bunkham learned, this is particularly difficult to do while suffering from postpartum depression. For new moms needing some attention, receiving and enjoying her craving boxes are one small way to show yourself some much needed appreciation after baby and get back your sense of self.