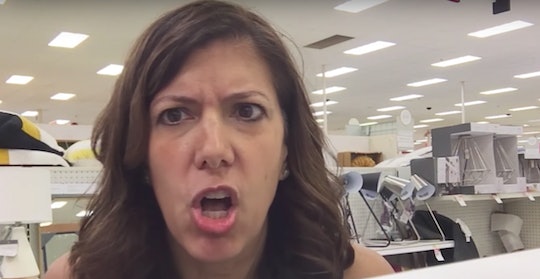 Back to school season is here for parents around the country, which means last minute Target runs to scramble for school supplies. This mom's rant about buying school supplies has gone viral because, not only is it hi-larious, but New Jersey mom Dena Blizzard makes some excellent points about public school education in the process. Blizzard's video — which has wracked up more than 80,000 views on YouTube and another 18 million on Facebook — follows her through a brief journey at her local Target to buy school supplies for her two teenage kids.

As Blizzard notes at the start of her video, "I've been noticing lately when people are doing their back to school shopping, everybody's complainin'." But then she immediately launches into the main point of her argument:

And my thing is, listen, it is the end of August. I will give you anything to take my kids. I’ll get you a yellow binder, I’ll get you a red binder, I will tie-dye some sh*t. You take these kids out of my house, I'll get you whatever you want.

Touché, Ms. Blizzard, touché. But even when looking past the hysterically funny idea that teachers have to put up with our kids — and thus save parents from the long stretch of summer insanity — she actually points out how teachers have to foot the bill for school supplies, too, something many parents don't realize.

"All you parents goin' on that 'I'm spending so much money,'' Blizzard says. "And guess what? You don't think those teachers are spending money?" She's right. According to TIME, teachers spend out of pocket for classroom supplies for their classrooms — a whole lot, in fact. A 2016 report found that on average, teachers spend $500 out of pocket on school supplies while as many as one in 10 teachers spend $1,000 or more each year. But truthfully, the bigger issue isn't about school supplies: It's about income-based segregation in public schools.

EdBuild, an organization working to reform public school funding, compiled a report in 2016 of some of the most disparate instances of income-based segregation in the United States, specifically along public school borders. In Blizzard's home state of New Jersey, the Camden City School district had the lowest revenue per pupil of all 50 states, at just $1,088 per student. In neighboring Haddon Township, revenue per pupil was more than 10 times that, at $11,349 per student, according to EdBuild's report. The disparities in spending on students matches average incomes: In Camden, the median household income is $26,201 where Haddon Township's median household income is nearly three times their neighbors.

Taking a look at school supply lists from elementary schools in each of these New Jersey school district also highlights the disparities: One elementary school supply list urges parents to find items at places like Dollar Tree while another encourages parents to buy foaming hand sanitizer such as Babyganics, as well as Clorox and non-Clorox wipes. Take a wild guess at which list comes from the more affluent district.

Blizzard rightly calls out the parents who clearly have the means to afford school supplies for their kids, but it's important to remember there are many who can't. Her argument is summed up best when she whispers, "All you guys gotta say, ''I don't wanna buy the pencil!' Buy the f*cking pencil." Preach.