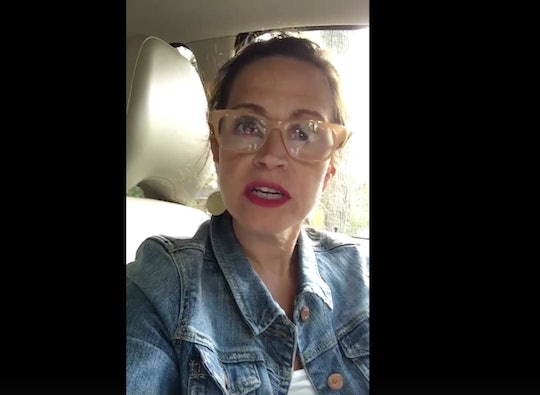 This Mom's Hilarious PSA For Changing Poopy Diapers In Public Is So, So Perfect

You're at a store or a restaurant when it happens: The unmistakeable odor of baby poop wafts in your direction — and yet, the poop-etrator's parents merrily go about their day while you're left gagging and running for the nearest exit. After a particularly crappy experience while shopping at Target, a disgusted mother is sharing a PSA for parents everywhere. And this mom's rant about changing poopy diapers in public will seriously make you LOL.

Freelance writer Tara Wood took to Facebook earlier this month to vent her frustrations with parents who blatantly stall when it comes to diaper duty. “If you are in public with your baby who has obviously had catastrophic diarrhea and has this horrific odor around him — that has, like, weight and mass and there’s green fog circulating around him and he smells like he just sh*t out a dead man — everyone else can smell that too,” she explained to the camera.

This hilariously blunt mama went on to dissect the annoying tactics many parents use to avoid the inevitable, thereby prolonging the suffering of unfortunate bystanders.

“So when you say, ‘Oh, Jameson are you poopy?’ Ummm, yeah. Jameson is not going to answer you. But I will,” Wood pointed out. “And that’s why after the third time this lady today at Target asked Jameson ... if he had a poopy, I said, ‘I’d like to confirm that Jameson does have a poop and there’s a family restroom at the front of Target and you should probably take him there to change him.’”

Wood pointed out reason number 1,547 to change your baby's poo-splosion ASAP: Would you like to remain stewing in your own excrement? Didn't think so.

“Nobody wants to hang out and shop the clearance section with you when you’ve got a baby that smells like it just sh*t out 15 hard-boiled eggs,” she said in the video. “If you smell your baby’s poop, other people smell your baby’s poop. Do your baby a favor, do your co-shoppers a favor and go change that poop! Jameson, you're welcome. I hooked you up today, brother."

Let's play devil's advocate here for a minute. Just for funsies. Maybe, just maybe, some parents are dilly-dallying to change their kids' obviously poopy diapers while out and about because of the simple fact that there's no guarantee of a baby-changing station. (Granted, Jameson's mom was at Target; so it's pretty much a given that there was a place to change him.) Because it happens. I've been in plenty of restaurants that had zero accommodations in the event of a baby with a stinky butt. And the chances of men's restrooms having a diaper-changing station? Even smaller. Because apparently, dad's don't do that sort of thing?

Even if there is an acceptable place to change your baby, sometimes all a frazzled parent wants to do is hurry up and finish an errand. So they pretend like it didn't happen. This is especially true if they have older (and often whinier) children in tow; because who wants to drag three kids into a public restroom if you can avoid it?

Still others (like myself) might have a particularly dull sense of smell. I'll admit that I have no shame in doing a stiff test in public. But unless there's an obvious poop face and grunting going on, I wouldn't even know it was time for an inspection in the first place.

There might be a couple of semi-legitimate exceptions to the change-your-kid's-poopy-diaper-already rule. But I'm going to have to agree with Wood on this one. I don't even want to smell my child's poop; so why would I knowingly subject innocent strangers to that type of torture? Just do everyone a favor and get the kid a new diaper. Pronto.