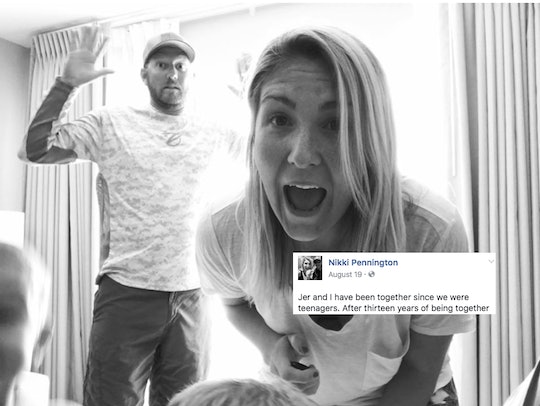 As humans, there seems to be some sort of desire to know the "secret" to just about everything. From staying in shape, to never seeming to age, the world is full of people asking, "what's your secret?" to someone who appears to have it all together. Usually, it's celebrities who are filling in the general public with their top-secret formulas for firm skin and flat bellies. However, sometimes it's regular women who with the best life advice. And when it comes to maintaining one of your most important relationships, this mom's secret to a happy marriage is realistic, relatable, and totally honest.

Nikki Pennington, and her husband, Jerred, have been a couple since they were both teenagers, and with 11 years of marriage under their belts — including three beautiful kids — they're pretty used to the age-old "what's your secret?" question. So, on Aug. 19, Pennington decided to just let all of her Facebook friends know the secret to her happy marriage. But, it soon went viral, racking up almost 75,000 likes and 29,000 comments. Of course, any sort of marriage advice is appreciated, but Pennington's is especially helpful by so many because of how simple it is.

Basically, Pennington tells readers on Facebook to "Just try every single day, in the trenches and on top of the mountains don't ever stop." And that's pretty beautiful.

Of course, Pennington is aware of the "typical" marriage advice, such as the "Don't go to bed angry" or the "Always say I love you when they leave," but she's of the opinion that, in reality, "The secret to a long lasting marriage is there is no secret at all." According to the viral post, here's what else Pennington advises:

It's a get up and try again over and over every damn day. It's hanging on tight when you are young, newly married and living on frozen dinners because it's all you can afford. It's staying up all night in tears with your first newborn child because you both are over tired, overwhelmed and scared to death but you are in it together. It's counting pennies when you are young so that you can build a life together for your future family. It's about knowing that nothing is going to turn out perfect, that your marriage won't be a highlight reel because that's not real life.

It's about being deep in the trenches of so many obstacles that life could throw you and getting to look over and know that you aren't alone and that your best friend is walking it with you. It's about knowing that you can never be prepared for the burdens you might have to help your partner carry but you do know you are willing to be there when they need rest from the burden.

Speaking with Us Weekly, Pennington explained that she understands why her post and the advice it contains has gone viral. "I think it’s resonating with so many people because it’s honest," she told Us Weekly. "So many of us don’t want to talk about the bad times in our marriage because then we are failing. But in reality, we all go through difficult times."

And seriously, marriage isn't easy. But Pennington's post serves as an important reminder that sharing a life with someone is so much more than simple clichés. It's real and it's messy.