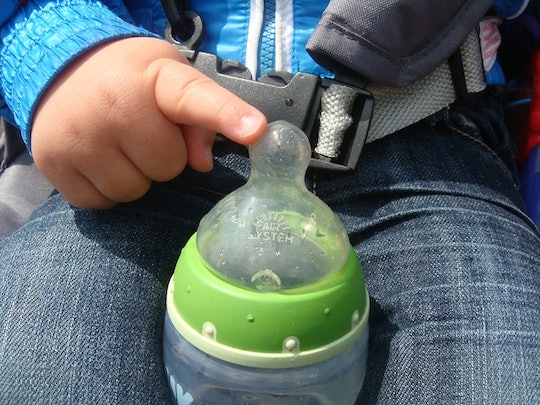 This Mom Has A Simple, Genius Bottle Storage Hack

When you're trying to feed a tiny human, things get messy. Even the most organized of parents find themselves being attacked by the rogue diaper or plastic container falling from their kitchen cupboards on the daily. The good thing about house clutter? There's usually a simple fix, especially if you think outside of the box. Which is why this mom's simple bottle storage hack is so mind-blowing, if only for its simplicity.

Earlier this month, Texas mom Brooke McDaniel posted a simple pic on her Facebook celebrating her victory over baby bottle clutter with friends, but it was so on point, affordable, and useful that it quickly went viral. Shall I spoil the hack right off the bat? Yes, we're all pressed for time these days, so let's get to the point: Basically, this mom bought a shower caddy from a home goods store for $12 and hung it on her wall. Genius, right?

McDaniel told Romper via Facebook that the idea came to her while perusing the aisles of a superstore, "About a year ago when my daughter was first born, I went to Wal-Mart to purchase a bottle holder." But, like most parents do, she found that every one was "bulky and took up so much space, so I decided to improvise!"

She explained, "I searched around the store for some type of container or shelf to use and ended up coming across this shower caddy. It was perfect!"

There are also hooks on most shower caddies, which McDaniel used to hang pacifiers, bibs, and burp towels (even your keys could easily be stored right there on your wall if you find you've got a little extra room). Don't have a perfect nook on your wall for a baby bottle shower caddy? Try the side of your fridge or even the inside of another, easily accessible cabinet to hang it. It's so simple it hurts.

Because this is 2017 and the internet is a crazy place, as soon as Daniels' post went viral, people started to hate on her genius idea. Some people allegedly claimed, according to an edit on the original post, that she had "way too many" bottles. She cleared this up with an edit to her original Facebook post, but also told Romper that having two children makes a caddy like this necessary. McDaniel said:

I now have two children on bottles so this particular caddy suited my needs for different sized bottles and the hooks on the bottom make it convenient when searching for a emergency pacifier. I also use one of these [caddies] to hold small bottles of paint and glue in my craft room.

McDaniel was also gregarious enough to acknowledge that Romper's suggestion that the caddy could eventually become a great spice rack once the kids were done with bottles was equally as genius. (OK, she didn't say "genius," but there was a smiley emoji involved, just trust me.)

As for worrying about the exposed nipples collecting germs, McDaniel had an equally practical take on the criticism she received from Facebook commenters. McDaniel edited her Facebook post to simply say, "This is my home." (Yas, queen.) She can easily wash the bottles for dust and any germs in the air in her house don't exactly keep her up at night, so everyone can just relax.

McDaniel added a nice reminder in her original post for all the parents out there worrying about how to do it "right." She said, "If no one told you today — YOU ARE A [sic] AWESOME MOM!"

Here's to all the parents out there making do with what they have and making life easier for themselves and their kids everyday. And let's all give it up for the underrated shower caddy while we're at it.

More Like This
When Does A Baby Recognize Their Father? A Pediatrician Explains
Paris Hilton Is Officially A First-Time Mom
Even If Your Baby Sleeps Better in Your Bed, It’s Still Not Recommended
The Best Travel Tips For Solo Parenting
What Parents Are Talking About — Delivered Straight To Your Inbox