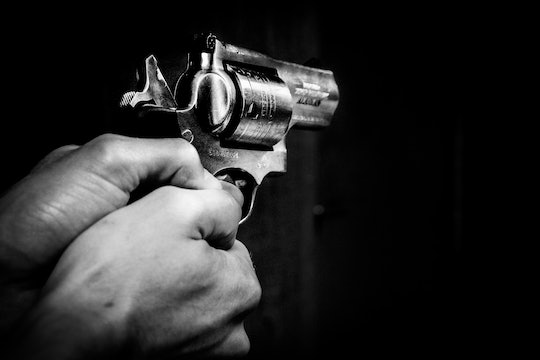 A young mom was shot and killed in front of her children in an apparent road rage incident in Missouri, according to reports from local news station KTLA. The 22-year-old woman was driving her minivan with her two children, ages 8 months and 3 years, when she was shot by a man in another vehicle. While her children were unharmed in the incident, this mom's story shows why gun violence against women is a widespread issue that needs more attention.

Whitney Gray was leaving the grocery store on Oct. 17 just after 7:30 p.m. with her two young children and a 16-year-old passenger, according to a press release issued by the Independence Police Department in Missouri. On Oct. 19, police arrested 39-year-old Christopher Taylor who was arrested and charged for the fatal shooting of Gray. Romper was unable to reach Taylor for comment, and will update with a statement from his representative as soon as we hear back.

Witnesses said in court documents that Taylor's vehicle was following Gray's van closely, tried to pass her, and nearly caused an accident. Gray's passenger apparently threw a beverage or other liquid out the window onto Taylor's vehicle as it passed, according to the Associated Press. A shot was then fired from inside Taylor's vehicle into Gray's. Gray was shot in the chest and died at the scene. No one else in the car was injured.

After fleeing the scene, Taylor was found 700 miles away at a hotel in South Dakota after tips from social media and GPS tracking lead police to him. One of the people who identified the vehicle from surveillance footage was Taylor's father, who told the Kansas City Star his son was "as a loner who was paranoid of the government and made every effort to stay off the grid." Taylor is currently being held without bond and a court date as yet to be set. A GoFundMe campaign has been set up by Gray's family to help offset funeral expenses and help with childcare costs.

More than half of women — 53 percent — who were murdered with guns in 2011 were killed by intimate partners or family members, according to the FBI's supplementary homicide report. According to that same report, people who have a history of committing domestic violence-related crimes are five times more likely to murder a partner if there are firearms in the house.

Over the last 25 years, more women have died from guns in domestic violence disputes than with all other weapons combined, according to research conducted by Michigan State University.

Current gun laws in the United States don't necessarily prohibit individuals who have committed violent crimes in the past from obtaining a firearm. A review of the background check system from 1998-2001 found that 2,800 individuals convicted of domestic violence crimes were able to purchase firearms legally. The government has been attempting to close those loopholes over the last decade, but gun violence continues be a public health crisis despite those efforts.

These extended background checks are decided by each state and are on top of what's federally required. As is laid out by the Second Amendment to the constitution, American citizens have the right to bear arms — but, according to the Brady Handgun Violence Prevention Act, an individual cannot legally purchase a firearm in the U.S. if they:

1. Were convicted of a crime punishable by being in prison for more than one year;

2. Are a fugitive from justice;

3. Are addicted to, or illegally use, any controlled substance;

4. Have been ruled mentally defective by a court, or are committed to a mental institution;

5. Are an illegal alien living in the United States unlawfully;

6. Received a dishonorable discharge from the U.S. Armed Forces;

8. Are subject to a court restraining order that involves your 'intimate partner,' your partner's child, or children; or

9. Were convicted of misdemeanor domestic violence in any court.

The problem, often referred to as loopholes, that many have pointed out is that federal legislation prohibits gun ownership largely based on conviction — and there are those who commit violent crimes, domestic or otherwise, who are not ultimately convicted. And there are avenues for obtaining guns in the U.S., such as at gun shows, or through private dealing, or theft, that may put guns into the hands of those who otherwise would not be permitted to have them.

Whitney Gray will become part of 2016's gun violence statistics, but her story reminds us that behind all of those numbers are people whose lives may have been spared had a gun not found its way into the hands of someone capable of murder.