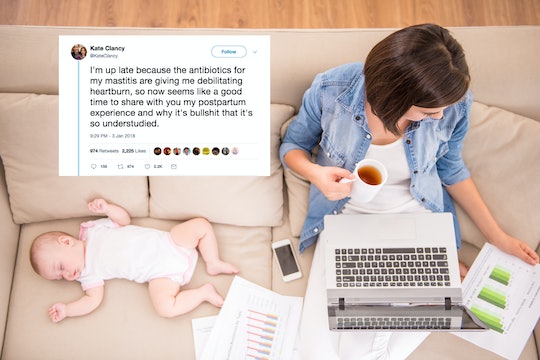 It's no secret that maternity leave is severely lacking in the United States. Federal laws grant many women the right to take a nominal amount of time off of work following childbirth, but there's no guarantee they'll be able to afford it, and many don't get as much recovery time as they need. And as important as sleep and bonding are, they're not the only reason women shouldn't have to rush back to the office, which one mom's thread on going back to work after giving birth makes painfully clear.

Kate Clancy, Ph.D., an Associate Professor of Anthropology at the University of Illinois, bared all in a Twitter thread on Thursday, detailing all the complications she suffered after giving birth, which aren't as uncommon as some might think. True, plenty of women give birth without complication, and some might be completely back to normal in a couple of months (I haven't met one, but I'll allow it). But Clancy's story, unfortunately, isn't that out of the ordinary. What is out of the ordinary is that she was willing to speak up about her issues, which some might find embarrassing, in order to educate the public on how serious creating a human and pushing it out of your own body can be.

Clancy gave birth to her second child in early August, she wrote, and she experienced "significant hemorrhaging, at least 2000ml," or 40 percent of her total blood volume. That's terrifying! It's also just the beginning. She also said that she suffered a second degree tear of her perineum and had to go on antibiotics. "A few weeks later," she wrote, she developed "horrible hemorrhoids and C. Diff," a bacterium that can cause kidney failure and life-threatening inflammation of the colon, according to the Mayo Clinic. The pain was so bad, Clancy wrote, she told her husband "I no longer wanted to be alive."

Weeks later, she developed anal fissures and a stage 2 rectocele, also known as posterior vaginal wall prolapse, when the tissue separating the rectum and the vagina weakens, causing the vaginal wall to bulge, sometimes even out of the vaginal opening. "I'm not enjoying telling you these things," Clancy wrote, "they are massively embarrassing. But it bothers me that we keep quiet about these common issues that postpartum women face." At five months postpartum, she developed mastitis, an infection of the breast tissue that causes pain, swelling, fever, and chills. But wait, there's more! She was also dealing with "massive diastasis" (a separation of the abdominal muscles) and two hernias, which can cause life-threatening complications. "Yet I spent all last semester being constantly asked when I'd be done with mat leave," she added.

"I am 100% sure that I would not have all of these issues if I hadn't pushed myself so hard to get back to work," Clancy wrote, for which she primarily blames "a culture that prioritizes babies but not women." She asked why more researchers aren't studying childbirth complications and postpartum care. One NIH study found that 15 percent of women suffer from postpartum anal fissures. One in 10 breastfeeding women develop mastitis, according to WebMDA About two-thirds of pregnant women have diastasis, according to Parents magazine, and rectoceles affect anywhere from 20 to 80 percent of adult women, according to Harvard Medical School, most commonly those who have had multiple vaginal deliveries. These are not freak occurrences. So why aren't more women talking about them? Because they're icky?

After Clancy's thread went viral, she received an outpouring of support from other women who shared their postpartum stories with her. "I hope a lot of us move forward in our workplaces, clinics, research programs, & relationships with loved ones differently," she wrote. If you'd like to hear more from her about the postpartum experience, the self-identified "ladybusiness scientist" hosts a podcast on, well, lady business, naturally. If you're a scientist, she implores you to study these conditions. And as for everyone else: "Involve moms in your work. Respect the boundaries of people in your workplace with Shit Going On. And do everything in your power to make your workplace more humane for everybody. The end."

More Like This
These 4 Sleeping Positions Will Keep You Comfortable After A C-Section
Here's The Best Time To Remove Your C-Section Tape
A C-Section Actually Doesn't Take As Long As You Think, According To Experts
Can The Way You Sleep Really Turn A Breech Baby?