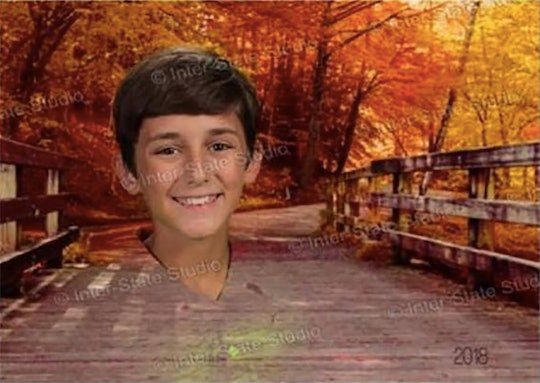 Whoops! This Mom's Post About Her Son's Hilarious School Photo Mishap Is One For The Books

Taking school photos can be a stressful ritual most parents probably wish they could avoid. Although it's great to have adorable snaps of your kiddos to frame and pass out to your loved ones, the process to get there can be pretty terrible. From keeping track of all the finer details (date, cost, etc.) to selecting the size and amount of photos you want, there's so much to consider before the big day arrives. But arguably the most difficult part about picture day is choosing your child's outfit. And if you're currently worrying about this exact dilemma, you'll probably want to check out this mom's tip for back-to-school photos. Doing so could prevent an unfortunate — yet hilarious — incident with a green screen.

Laurel Boone Hutsell, a mom of two, took to Facebook on Friday to share her 12-year-old son's back-to-school photos. Although Hutsell's son, named Carter, is clearly an adorable kid, she didn't share the pics to show off his winning smile. Nope, Hutsell was there to share the hilarious results of Carter wearing a bright green shirt on picture day.

Hutsell, according to her Facebook post that has garnered over 36,000 shares and 8,000 likes, didn't consider the school would use a green screen to take the photos. And to be fair, some schools forgo green screens entirely. When I was a teacher, for instance, the hired photographer took our class photo in the cafeteria. Trés fancy, I know.

Not to mention, Hutsell didn't want Carter to blend in if the photographers used a dark grey background for the photos. Hutsell talked about this beforehand with Carter, and she shared a snippet of the conversation with Love What Matters:

Me: You have the dark gray, but that might blend in with the gray background they used in last year’s picture.

Me: You also have the navy, but you have already worn that one before. And last year you had this darker turquoise color on. We referred back to the 6th grade head and shoulders only picture that is proudly hung in our foyer.

Carter: Yeah, okay. So what do we have left?

Me: Well, this green one. That should look great against the gray or taupe background. Whatever they use.

Anyone want to guess how the green shirt decision went? I'll let the pictures — and Hutsell's funny commentary — do the talking.

"Yay America," Hutsell captioned this shot of Carter disappearing into an American flag.

"Autumn is my favorite," Hutsell joked about a photo of Carter's body floating out a leafy bridge.

"Like my shirt?" Hutsell commented on this confusing pic.

"At least we know it's 2018," Hutsell sarcastically said about this timely photo.

"The green shirt is trying hard in this one," Hutsell perfectly summed up this snap.

"So. Much. Gray," another caption read.

"Not even sure what to say about this one," said about this head scratcher.

In response to another USA shot, Hutsell quipped: "We heart the USA!"

And in regards to the final season photo, Hutsell wrote: "I love fall."

Interestingly enough, Carter had apparently warned Hutsell about a possible green screen disaster before the photos arrived. Hutsell recalled in her Facebook post:

My son - Mom, I shouldn’t have worn the green shirt for pictures. It will blend in with the green screen they used.

Me: They used a green screen? What?! I probably should have read some fine print. Maybe they will be ok.

Hilarity aside (my favorites are the fall photos), Hutsell brought up a good point when she referenced the "fine print." It feels like a good reminder to assess all of the fine details before picture day, people. And if you don't see any mention of green screens when you're filling out the photo forms, don't hesitate to ask a teacher or the hired photographer.

Although some parents might be disappointed with this green screen portraits (professional photos ain't cheap), it looks like Hutsell is handling the comical situation in stride. Kudos to Hutsell and Carter for turning an easy mistake into a viral masterpiece.