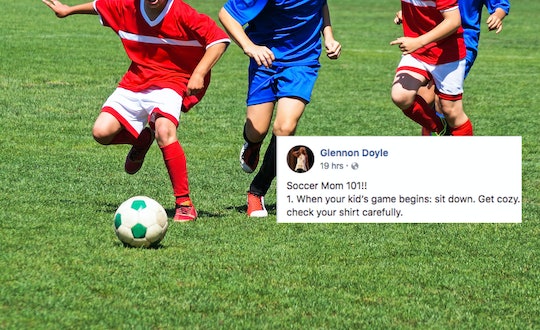 This Mom's Advice For Sports Parents Should Be Required Reading

Sports do a lot of great things for children. They teach them about teamwork, commitment, and how to win and lose gracefully. But oftentimes kids aren't the only ones with lessons to learn. In fact, this mom's tips for sports parents should be required reading, because not everyone has sideline etiquette down.

If you've ever been to a youth sporting event, you may have noticed that there are two general kinds of sports parents: those who quietly observe or cheer their little one on and those who are a little too involved in the game, screaming their heads off and out-coaching the coaches. Author, blogger, and self-proclaimed "soccer mom" Glennon Doyle suggested in a now-viral Facebook post that parents aim to be in the first category. And if you can't, well, shove a lollipop in your mouth and pretend. If you're having any doubts about Doyle's credibility in the subject of sporting events, she has her wife and Olympic soccer star Abby Wambach to back her up. But this advice really speaks for itself.

Doyle begins her "Soccer Mom 101" post by telling parents to sit down and take a look at your shirt. If you see the words "Coach" or "Referee" down there, you can chime in throughout the game. If not, she recommends that you, well, "hush, mostly."

As important as this is, Doyle doesn't claim that it will be easy. In fact, she shares that it will be "surprisingly difficult." She and Wambach know firsthand just how difficult, considering one of them is an Olympic soccer superstar and the other is a "Bat Sh*t Crazy Mama Bear Who Truly Believes that Every Ten Year Year Opponent Who Touches Your Daughter’s Jersey Intends To Kill Your Daughter Dead." But don't worry if that all sounds a like a little too much for you to handle. In that case, Doyle offers this sage advice:

SO. Since you cannot be trusted: Bring lollipops. Put them in your loud obnoxious mouths as soon as you sit down on the sideline. Let them serve as a reminder to you that children are dropping out of sports in record numbers — largely because their parents are behaving like a**hats on the sidelines in record numbers. Things, in general, are less fun to do when bigger people scream at you the entire time you do them.

She's not wrong about kids dropping out of sports at a surprising rate. In fact, 70 percent of kids quit sports by age 13, according to the Washington Post, and parents do actually play a large role in causing them to do so. Parental pressure combined with early college recruiting takes the fun out of sports for many kids, leading them to leave the field. But Doyle suggests that parents can ease up a little bit.

With that said, she suggests that parents "Let the kids play. Let the coaches coach. Let the refs ref." As a parent, your job is to simply parent. The only yelling that you should be doing is to cheer your kids on. Bonus tip: Pass your lollipops to other parents to win friends and keep them from overstepping as well.

Parents and coaches alike chimed in via the comments section, praising Doyle for her message and adding their own bits of advice. One person wrote, "If Abby Wambach can sit on the sidelines with a lollipop, then everyone can. I love this more than everything."

Another shared their perspective as a coach, with the caveat that Wambach may be the exception to this rule. "As a coach I completely agree, however if Abby Wambach happened to end up on my sideline she can yell coachy things all she wants," they wrote.

Yet another commenter explained that these rules apply even after the final whistle has been blown:

And just to add to that, no coaching after the game. Simply tell your child that you love to watch them play. They do not need their parents to coach them, they need their parents to love them. You may make an exception to this rule because your wife is an olympian but the rest of us may not!

I think the moral of this story is that parents, regardless of how much sporting experience they may have, are best serving their children when they use their time on the sidelines to express their support. Besides, who doesn't love lollipops?