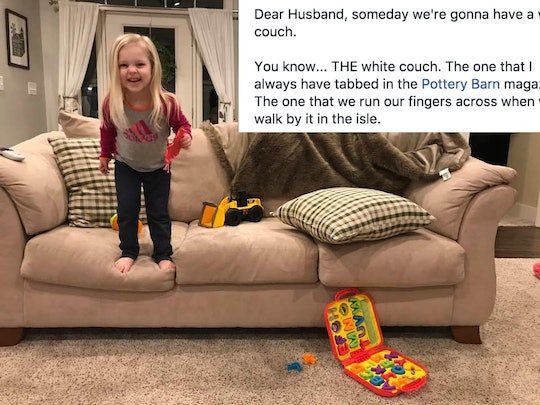 "And this is why we can't have nice things." It's like a recording that plays in my head whenever my toddler dumps her juice box on the living room floor. Or when I notice notice fresh crayon scribbles on the den wall. Or as I realize (yet again) that I'm losing the fight snack/food crumbs that practically consume my minivan. I think to myself, "Someday, I'll be able to have (fill in the blank) and it won't be destroyed by children." (I mean, what parent hasn't?) Except, there's another side to this sentiment that maybe we haven't considered. And this mom's touching post about the white couch she's always wanted will give you all the feels.

Lauren Eberspacher — mom of three young children and blogger — recently took to social media to express a sentiment most parents can probably relate to, as Pop Sugar Moms reported. On her Facebook page, "From Blacktop to Dirt Road," Eberspacher wrote a moving letter in which she promises her husband that one day, they will own the luxurious white couch they've always wanted. "Dear Husband, someday we're gonna have a white couch," she writes. "You know... THE white couch. The one that I always have tabbed in the Pottery Barn magazine. The one that we run our fingers across when we walk by it in the isle. Yeah. THE white couch. Someday we're gonna save up and get one."

Eberspacher went on to promise her husband that one day, there won't be juice stains, or "apple cores shoved in between the cushions," or a vague curdled milk smell coming from their perfect, white couch. The cushions won't sink down in the middle because kids have jumped in it. There won't be various stains that need treated and scrubbed out. One day, by golly, they will have the couch of their dreams without fears of it being destroyed by their rambunctious children. She continued:

When people come over, we aren't gonna have to clear the toys off of it. The throw pillows are always going to be in their rightful place and the throw blankets will always be folded on the arm rest where they belong, not strategically laid out so that they cover the tears in the cushions or the stains on the fabric. We won't sit down on tiny cars or get poked by Barbie arms. We will just sit with our company and enjoy the comfort of our white couch.

It does sound pretty glorious, doesn't it? Ah, I can just picture it now, in my own home ... To be honest, though, I'm probably just as likely to spill something on a white couch — so that wouldn't be my first choice of color. But I totally get where this mama is coming from.

Yet, Eberspacher comes to the realization of what it would mean when she eventually does get her while couch. "When we sit on it together in the evenings, we're going to find ourselves running our fingers across that gorgeous, clean fabric that we've saved for and dreamt of for years," she writes. "And we're gonna miss those stains, because it's going to mean that our kids aren't so little anymore." She continues:

The arm rests are going to be sturdy and the cushions are going to be fluffy. I'm sure it's going to be just as comfortable as we thought it was going to be. But I'm sure there's going to be a twinge as we reminisce about our kids jumping off of our couch from years ago. Pretending they are super heroes or going on wild adventures. I think that someday we're gonna miss the years of our old, worn couch.

As parents, the days can seem monotonous/insane/never-ending — but dang, the years really are so freaking short. But still. I hate it when strangers tell me to, "Enjoy every moment," or point out, "You'll miss this someday." (It's incredibly unhelpful when I'm dealing with multiple young children melting down in a public setting.) However, this mom's touching post serves as an important — and non-condescending — reminder that it's important not to wish away these difficult years. Eberspacher concluded:

So today, Dear Husband, let's cherish our old, worn couch. Let's keep scrubbing out the stains and repositioning the throw blankets. Let's keep cuddling up with our babies and watching them go off on grand adventures in our living room. Dear Husband, let's cherish the days of our old, worn couch. Because the years we have with it will undoubtedly be the most precious, exhausting, beautiful days of our lives. Yes, someday we will get a white couch. But today I'm thankful for the one that we have... for the little people we have.

Thank you so much for this important reminder, Lauren. Although the state of my furniture sometimes bums me out, I'm more than willing to wait for that "white couch" of my own.