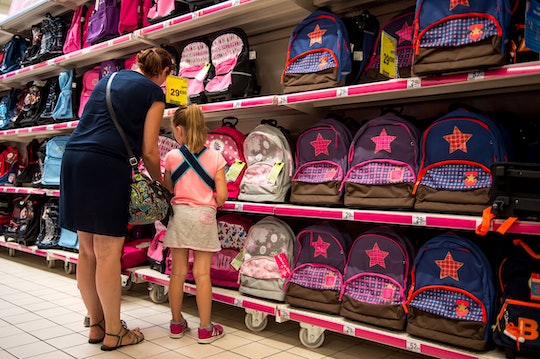 If you have kids (or are friends on Facebook with anyone who does), then you've probably seen them: the first-day-of-school photos of kids holding up messages written on chalkboard signs before heading off to school. For some, it's a sweet tradition, for others it's a little over the top. But this mom's viral back-to-school photo — featuring her own custom chalkboard sign — is one that a lot of moms can truly relate to at this time of year.

According to TODAY Parents, blogger (and mom of six) Meghan Oeser has been gearing up to send her kids back to school at the end of the summer, and, like the rest of us, has been seeing plenty of fancy social media photo shoots celebrating the occasion with custom signs marking the moment. Some children hold simple signs saying "back to school!" or "first day of kindergarten!" while others are increasingly elaborate, listing all kinds of details about the child, including age, likes and dislikes, and what they want to be when they grow up. For the parents, it can be a fun way of commemorating that milestone — something to look back on when they're older — but the ubiquity of the trend on social media led Oeser to wonder, what if I made my own sign?

So make a sign she did, and it was hilariously honest. Celebrating "Mom's First Day Of Freedom," the sign lists her age according to the decimal (36.9) and her weight (115, according to her driver's license). Her likes sound an awful lot like things pretty much all moms would probably agree with — babysitters, silence, pooping alone — and many of us can likely also relate to her unique set of mom-skills, like spontaneous napping, tuning out her kids, and burning food (I know I'm particularly good at all of those things). As for what she wants to be when she grows up? Oeser said she wanted to learn how to "adult," which is an ambition that a lot of moms share (seriously, someone needs to start a class). And, fittingly, she held it up while sipping Malibu rum from a straw, because, hey, why not?

Oeser posted the photo to her blog, The Ultimate Spoon, and unsurprisingly, people are loving it. But she's also not the only mom to creatively commemorate the less-than-sappy feelings that can accompany back-to-school season. According to FOX 13, Alabama mother Keshia Gardner also went viral for her own take on her children's return to class, in one totally amazing, jubilant way. In the photo, Gardner can be seen literally leaping for joy while her embarrassed kids stand in the background wearing their backpacks.

But this isn't even the first time Gardner has taken such a photo. She explained to FOX 13 that the funny shots are actually a family tradition:

We do them every year. My husband takes them and he's a plumber. We just do them really quickly before we leave for school. For some reason, this one decided to go viral.

But perhaps the very best part of Gardner's photos is that it has inspired others to come up with their own creative take on her original photo, like one perfectly photoshopped pic showing a triumphant Gardner leaping joyously — at the Rio Olympics.

Of course, not all parents are overjoyed at the prospect of sending their kids to school — my own kids are set to start kindergarten soon and it literally makes me want to crawl up in the fetal position and sob uncontrollably. But seeing photos like Oeser's and Gardner's are a funny reminder that, for a lot of parents, the start of school really is the most wonderful time of the year. And it's pretty cool that they have such a great sense of humor about it.