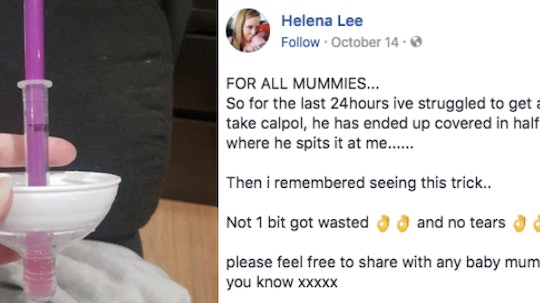 Most babies out there seem to have an uncanny knack for knowing when their parents are trying to give them medicine, and most parents are all too familiar with the subsequent helplessness they feel when their babies refuse to take the one thing that might help them get better. But thanks to this mom's hack to get babies to take their medicine, all of that could change. The trick is totally simple, and totally genius. Get ready to keep it in your back pocket for the next time your baby gets sick and fussy.

Helena Lee — a British mother and nursery practitioner at the National Health Service in England — got worried when her young son, Alfie, came down with a high fever. As she told Romper:

[Alfie] was just generally really unhappy. He's normally a really happy smiley baby and even with cuddles he just was crying, he wasn't sleeping very well... which again is very unlike him. I felt pretty helpless if I'm honest, normally if anyone can settle him quite quickly it's me and all the cuddles or rocking etc wasn't really doing any good and I was getting more and more concerned. I'm very aware how dangerous high fevers can be for little ones and was getting eager to get it down asap.

She wanted to give him some CALPOL (for those Americans not in the know about British medicine brands, CALPOL is similar to Tylenol for infants and kids), but Alfie was not having it. He just kept gagging and spitting it out, even as she tried for hours and hours. That's when she remembered a trick she'd heard about previously.

Deciding that she "had nothing to lose," Lee took the syringe from the medicine packet and pushed it up through Alfie's bottle nipple. Miraculously, the 8-week-old baby began swallowing all the medicine up. As Lee wrote in a Facebook post that has since gone viral, "Not 1 bit got wasted... and no tears."

Her helpful post soon blew up online, with plenty of other parents who have been in her situation before (and will inevitably be in it again) eager to try the trick, and tagging their friends to boot. Now, it has been shared over 100,000 times, to Lee's total shock. As she told Romper:

I shared it because I have quite a few mums on my Facebook and I thought it may help others out as surely Alfie wasn't the only baby that does that! I never ever imagined it would go viral like it has.

It's not surprising, though, that people have been so eager to spread the word about the helpful hack. When it comes to helping a sick, unhappy child take medicine, parents have to get creative and try all sorts of fixes. I remember when I was a kid, I couldn't swallow pills, and my mom and dad would frantically mash up my antibiotics into applesauce. (Sometimes it worked, sometimes it didn't...)

For people who need even more alternatives, Parents has a whole list of recommendations for frazzled parents to try out next time a child avoids taking helpful medicine. The publication recommends everything from getting a flavor enhancer to "turn yucky into yummy," to tricking your baby into opening their mouth by getting him or her to look up. The article even mentions the bottle nipple trick Lee ended up trying, and informs parents that some stores sell pacifier medicine dispensers if they want to get all official about it instead of going the DIY route.

It's good for parents to have as many tricks up their sleeves as possible when they're faced with a sick, crying baby. It's no wonder that the internet is loving Lee's helpful post.