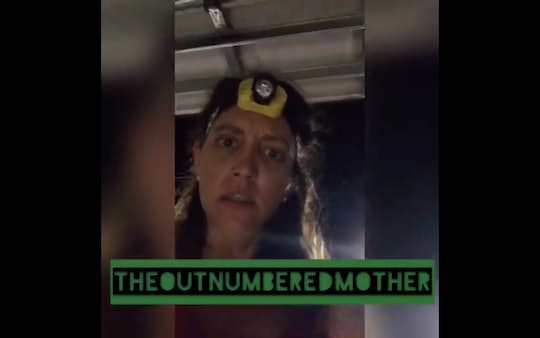 In the midst of all the devastation and destruction brought on by Hurricane Irma, a number of stories of ingenuity, bravery, and humor have also surfaced. This mom's viral Hurricane Irma rant is both hilarious and encouraging. She opens up about the struggles and ridiculousness that have ensued since Irma hit her hometown.

Amy Hunter is a mom and blogger out of Naples who runs the popular page, The Outnumbered Mother. After Irma left her and her family without power, she took to Facebook to rant and rave about the absurdity of her situation. In her now-viral video, Hunter laments Irma for ruining her "Wonder Woman moment." Rather than golden bracelets, Hunter is left wearing a hair tie on her wrist — along with a headlamp that she calls her own personal Eye of Sauron from the Lord of the Rings universe.

As is often the case for moms, Hunter is busy dealing with the wants and needs of her children while waiting out the storm. I'm sure many moms will nod in commiseration when she mentions the fact that her kids are constantly asking for snacks and complaining that they forgot to charge their iPads to last during the power outage — despite her numerous instructions to do so prior to the storm.

Hunter also provides details about the state of her house and surrounding neighborhood, pointing out a tree that has fallen and landed on her minivan and a neighbor with questionable clothing choices:

There’s some guy who’s streaking down my street in a Speedo ― a Speedo! ... What the heck is going on with people?

She is quick to reassure viewers, though, that she and her family are doing alright despite remaining without electricity. "We’re fine," she said in the video. "We’re here. We have no power.”

The video already has more than 7,000 views and numerous comments, many of which are praising her good spirits despite the magnitude of the storm. One such commenter said:

Young lady, you're a cute one. Sarcastic, but I'm glad that you're family is safe and in good spirits. Life sends you adventures, and sometimes brutal and challenging. Do your best to see it that way. Hope that all is on track for you soon. There are more hurricanes in the Atlantic. Be smart and be safe, please.

Stories such as this offer much needed hope and comic relief in times of crises. Much like the recent stories of Kristen Bell's Irma entertainment for seniors stranded at her hotel, Hunter's video gives people a chance to laugh and take their minds off of the stress and worry that comes with natural disasters. Check out the full video above to get in on the jokes.